The Oversized Drinking Straw of Fail

The Oversized Drinking Straw of Fail was introduced in Sub-Episode 7 of Sonichu #4, wherein Chris sucked on a beverage whilst evading jerkops. Numerous Trolls and Encyclopedia Dramatica pointed out that the clumsy artwork make it look like Chris was fellating a big, fat phallus, playing on his deeply-rooted fear of becoming a homo. In the time since its creation, the drinking straw has become one of the most recognizable panels from Sonichu due to its absurdly depicted subject matter and overall poor quality signature of Chris's illustrations. Many artists have parodied the enormous straw, often somehow drawing it even bigger than Chris's version for comedic effect.

In the version posted on the CWCipedia, Chris has edited the Oversized Drinking Straw to look slightly less retarded: 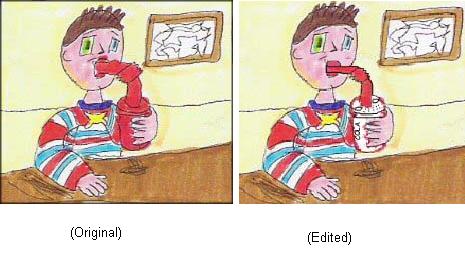 Chris rarely changes or improves his work post-completion, so the likely reason behind the change is that he realized just how phallic the straw appeared and edited it to maintain his claims of heterosexuality. It's worth noting that even the "new, improved" Drinking Straw is wider than any of cartoon Chris-Chan's fingers or thumbs, and the part above the bend is for some reason narrower than the part below. Also, given the nature of Chris's terrible artwork, it's hard to determine which of the following is correct about his "new" mouth...

If this is the case, it would be impossible to drink in the manner depicted unless you've got vacuum lungs. The drinker's lips have to form an airtight seal around the straw in order to draw liquid up through it.

2: Has he drawn himself with massive niggo lips?

Chris's lips may have simply ballooned to an enormous size, giving the impression that he's wearing Maybelline.

Whatever the truth may be, Chris cannot even correct any of his mistakes without finding some other way to screw up in the process.