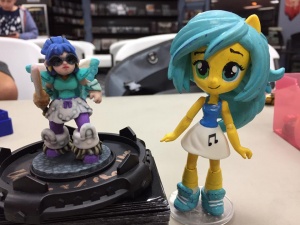 This is just sad.

The Christine Dolls are dolls, ostensibly modeled after Chris, custom-made from a Vinyl Scratch My Little Pony toy figure and a Skylanders 3D-printed game avatar. The dolls seem to serve a similar function as the Medallion, in that they broadcast to the public his interests, gender identity and, of course, the fact that he’s autistic.

The first appearance of the MLP doll was in a paid video request entitled Singing an ol' diddy, in which it is perched on his desk. During a subsequent request video, Chris said, "This is another custom figure I made. Our hair matches!”

A few months later, in January 2017, he began showing off another custom Christine doll, this one designed in the Skylanders video game.[1] 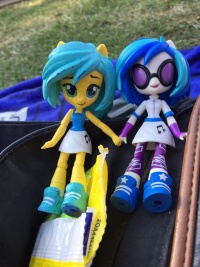 He was spotted in public with "MLP Figurines sticking out of his purse," by a field agent who snapped his photo at a Toys R Us in September 2016.

When Chris went to the Cville Pride LGBT event a few days later, he posted a photo to Facebook, showing the Christine Doll holding hands with another Vinyl doll, with the caption "Vinyl and I are enjoying the music at #CVillePride2016."

Chris photographed himself playing with both the Christine Dolls in public at The End Games in January 2017.

His habit of bringing toys in public to play with is not exclusive to these - in 2015-16, he brought Amiibos modeled after Sonichu and himself to places such as McDonalds and OmegaCon. 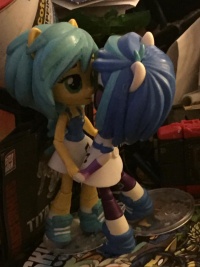 Role-playing a lesbian couple with the Christine Doll and MLP's Vinyl.

Chris displayed yet another sign of his deteriorating mental condition when he uploaded a set of videos in September 2016 (a paid request and his political commentary), in which he continuously says "we," in reference to himself and the doll. In December 2016, he still had this disturbing habit, as seen in Z-Ring Fun Extra at the 1:34 mark, when he knocks over the doll and calls it "myself.”

He again posed them as lesbians, photographing the scene and posting it to Facebook, in the following year.

The MLP doll was featured in A little Fluttershy singing (imitation), a video of Chris's doll "singing" in a voice from the MLP show, which he tweeted to the actual voice actress.

In Sonichu #12-9, Comic Chris bears the appearance of the Christine Doll at Canterlot High School, and is also given the name "Night Star," although her full name is "Christine Night Weston Star Chandler." She is described as "an old, prototypical friend of [Night Star] and Christine's."

After the two meet up, Night Star shows off her cutie mark (a sign of one's destiny, stamped on the hip; a concept Chris ripped off from My Little Pony). Seeing her doppelganger's mark is enough to transform CC into a new form that more closely matches Night Star's.

The scene was presumably written by Chris to retcon his prototype ponysona to visually resemble his newer one. From a reader's perspective, the scene is highly confusing, as the doll-based character had only debuted in the comic in the very scene that she was magicked into a new form that looks identical to a character who had also only recently debuted in the story, both of whom are based on Chris's idealized view of his Tomgirl self.

Chris later clarified in an August 2020 Q&A that this character is in fact Comic Chris and not a new counterpart of himself.

Remains of the Christine Doll, shortly before being crushed by a metal bedpost.

On 16 January, 2018, Chris filmed himself destroying the Christine Doll after the Idea Guy convinced him that it was being bugged by Nazis.

On 19 February 2018, Chris unveiled a new version of the doll. Chris painted white stripes on the figure's arms and a triangle on the chest, intended to resemble the Adidas tracksuit from the gopnik outfit which Chris has worn regularly since its debut in Cherokean Chant. Chris does not seem to care that the figure's shirt does not resemble the tracksuit in either color or fit.