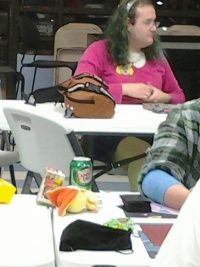 The End Games is a card-game shop in Charlottesville that Chris frequented until his ban in early 2018. Chris enjoyed playing Pokémon here, and made a few adult friends from the Pokémon League.

Chris was spotted here by the brother of a Kiwi Farms user in October 2015[1] wearing the Sonichu Medallion and a pink shirt and dress.

The first of the BraveryJerk Interviews occurred here in September 2016. 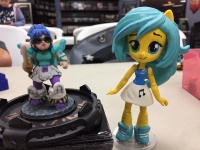 In January 2017, he posted a photo of himself playing with his Christine Dolls while children play Pokémon around him.

Allegedly, in April 2017, Chris dropped his medallion on the floor and had an outburst over it.[2]

Although there is no concrete proof behind the allegation, there is a bit of circumstantial evidence for it. The incident was said to have happened on 2 April, a Sunday; during that day, Chris had tweeted, "Life is f***ed up. (I had a real stressful Sunday afternoon) Gawd! Just... GAWD!!!"[3]

In November 2017, amid his obsession with Hyperdimension Neptunia, Chris attended the club with bodyguards – in the form of Magi-Chan and Discord, figments of his own imagination.

In early 2018, Emily spotted Chris loudly singing into his phone:

Weens have occasionally harassed the shop's management with made-up stories about Chris. The management has given responses showing they do keep an eye on Chris.

Shan is possibly referring to Shane B., the owner of The End Games.

A fan asked Shane whether Chris was arrested, which he denied.[8]

Two explanations have emerged for the ban:

The first involved him arguing with a game judge:

The second involved a dispute over whether Sonichu was a Pokémon:

Demands to be unbanned

On 17 January 2020, Chris demanded on Twitter that he be unbanned from the store so he can learn how to play Dungeons and Dragons (after becoming obsessed with the game after ProjectSNT cited it as inspiration in her redesign of his characters). In his rant, Chris also brought up the Dimensional Merge and claimed that the unbanning was necessary as learning how to play D&D from random nerds at End Games would help bring it to fruition.

Note: Chris seems to have butchered an idiom, "fine words butter no parsnips", referring to how nothing is achieved from empty words.

A day later, Chris evaded the block by following the End Games Twitter with his MagiChan111448 account.

On 26 January 2020, the End Games posted to their Twitter account a piece of mail that they had received without a return address which included a strange pair of eyes. The art style and handwriting are a dead match for Chris's, and he had previously mentioned sending them a letter. TEG tweeted: