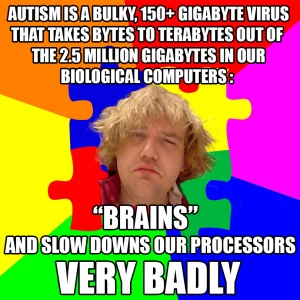 "Autism is definitely that thing that makes... the brain shut off." -Christine

Announcement 04/16/2016 is a video Chris streamed on 16 April 2016 in which he "launches" Sonichu Entertainment of America – a business concept fed to him by the Lady Managers. In it, Chris reads off a script announcing the venture, unaware of the many jokes peppered in by the Lady Managers to mock him.

Chris concludes the video on a unrelated note, asking fans to make a meme about the effects of autism.

...Chandler. Reporting live once again, I have an important announcement today. [breathes in] Due to the recent growth in sales, I'm- ah- I'm no longer able to fully sustain fulfilling Sonichu orders on my own. But I am still very dedicated on fulfilling everybody that's gotten in so far. As I've yet to fulfill. And as for, uh, books. Um, yeah. I've just been having difficulty gettin' them in, so be patient, be- I will have the books come out, the book orders fulfilled very soon, I promise. Anyway so, yeah. With the recent additions to my workload I figured I have been spreading myself too thin, and the stresses of life - it really does bother me. It gives me GREAT pleasure to announce the launch of Sonichu Entertainment of America! A pre-IPO global entertainment and media company. Sonichu Entertainment of America is excited to launch a brand new store on Zazzle, selling fun for the whole family! Sonichu products like t-shirts, hats, and mugs and many other fine products. Look out for many fun and exciting products in the future too. And given the expension, I will be hiring a team of talented profes- professionals to make this vision a reality! While I still swerve- still serve as the sole owner, creator, and creative director of the Sonichu world and characters, this will allow me to focus on my transition- my female lesbian soul into an all-natural female woman, which is already added an... incher- inch to my bust size in just two weeks. Thinking of what- and among other details I'd really b- like to- this will also allow me to focus more on the drawing and w- and writing of my book pages.

Think you have what it takes? It's no easy task to s- step away from making Sonichu kit--merch--and the, uh figures, and medallions, personally. No easy task for me to do that. The only way I can do this is for trusted employees who are, like me, and who I personally would identify with to take this on, this important next step. The ideal person- woman- pref- women or man. The ideal person for the job should, well, remind me of myself. She sh- he or she should, at minimum, love and adore the adventures of Sonichu and Rosechu, have experience working with arts and crafts, beyond eighth grade leading le- reading level, or higher, and a lot of employees who, could be like me, mmm, but not necessarily in totality, heh. Definitely women ag- amongst [inaudible]. I am an equal opportunity type employer, or I would be anyw- I am I am. And also be supportive of, uh, the LGBT VHS lesbian, gay, bi, transgender, virgin, hermaphrodite, snowFLAKE community. I just learned a few new terms from readin' this. And since I am truly woman at heart, Sonichu of America should be recognized as and 8-A, woman owned, small business.

Let's talk about benefits! Emplo- hired employees will receive twenty five percent profit on all sales, exclusive access to, me, Christine Weston Chandler, and uh, and, talks with, uh, collaboration and, uh, on how to make the figures among which, and so forth. Access to private company promotions at gaming conventions, conferences, and enkloyee- employee slumber parties. S- to be determined among which. And should things work out between us and we have shared interests and passions, opportunities for romantic encounters with Christine Weston Chandler, but only if we built it from the ground up. Now let's talk more about the open position. Hedgehog- [inaudible] hedgehog fans. You will learn from the master herself, Christine Chandler, myself. Learn the secret art of the figure assembly from multiple figures among which. Give birth to some of my favorite creations, as well as work to produce other merchandise that I choose to create a prototype for- here on. Animators, video production assistance. You will be needed to work other than creative- d-direction of- and vision of- famous creator, myself, Christine Chandler. You will be tasked with producing an anime cartoon or CGI TV show starring Sonichu, which I personally would have total creative control over- would personally voice as myself and Sonichu therein.

Romantic coordinator- in charge of making sure I find a sweetheart. You will navigate the topsy-turvy world of modern dating. This position is very important, as I am quite a busy businesswoman, who... well I do ten- I do like to socialize, but it's not like I don't make time to, it's just, I have, I'm busy, and the autism kills my brain speed, mm. [humming] Ah, you would also be responsible for developing a course, or trying to help me compete in the lesbian dating marketplace. Including but not ah- limited to, lesbian attraction, dating education, [pauses] and lesbian sexual positions [inaudible]. My associate wrote this for me. I mean she's doing- she's done a fabulous job, she's a great writer. And also, by gosh, preferably fit, in shape, female badasses, la femme nikitas. As puppet, figure, often maligned- mal ig- mul ig nayed- huh. Mah lign- yeah, ma-lied. By some of- internet's most vicious trolls, you shall be escorting me around various public events, inf- information on which self defense training, you know, are requested. Mm, karate, cuck-fu, vaj-won-do, rape aggression defense, and other female-oriented martial arts, et cetera. [fumbles the papers] Ehh, last page, I promise, uh.

If you are ready to make history and join this great opportunity, make a YouTube video, or summit- submit your résumé to anightinchristine@gmail.com, which that will be below this video, after it's fully uploaded, that email address. Sonichu and I have had many adventures over the last SIXteen years, and many ups and downs, with distresses and difficulties in life. But, together! Together, let's make Sonichu and Rosechu great again! [smiles] And that's the big announcement! Thank you very much. [picks up iPhone]

And also I'll leave y'all with one final, bit of, uh, thought that I came up with. Hmm, in regards to autism, pretty much, and how I feel about it. I have found recently- I have found further that autism is definitely that thing that makes [pauses] the brain shut off. Hmm, I've mentioned that before, but. Ah- here- you can quote me on this, make this a meme, for the image of the- autism jigsaw puzzle right in the middle and do the, uh, letters up bove, and over it, in that font, I quote, "Autism is a bulky, one hundred fifty plus gigabyte virus that takes bytes to terabytes out of the two point five million gigabytes in our biological computers- brains. And slow downs our processors, very badly. [puts down iPhone, picks up PS4 controller] Y'all have a good, safe day. Thank you.