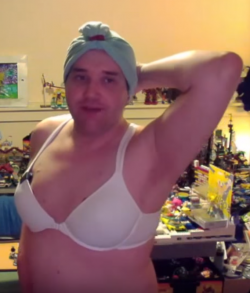 April was the fourth month of 2016. April was generally mostly uneventful, with Chris only making a few videos and Facebook posts throughout the month. Despite this though, Chris notably fulfilled more paid video requests, and bizarrely presented his breast massage routine on Youtube this month. April would also notably mark the official beginning of the Financhu Crisis, with the first few videos devoted entirely to e-begging being uploaded.