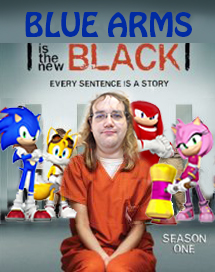 26 December 2014 was one of the more eventful days of Chris's life, certainly since graduating high school. Essentially 28 October 2011 all over again, the date found Chris in trouble with the law once more for assaulting staff at a video game store, this time with pepper spray.[1] On 15 October 2015 he was finally found guilty of a misdemeanor charge, and received a six-month suspended sentence and a $541 fine. 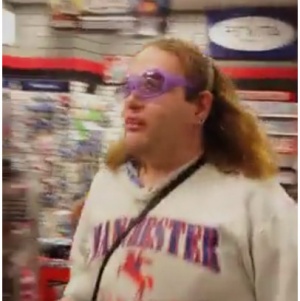 The now infamous photo of Chris, seconds before the assault.

By the time of his arrest, Chris had already been engaging in various acts of protest, mainly vandalism, in an attempt to force local retailers to stop selling Sonic Boom. As a result, he had already been banned from every GameStop within driving distance of his temporary home. Nevertheless, on the day after Christmas, on a trip to Charlottesville Fashion Square (from which he may have already been banned) with his mother, Chris visited the GameStop outlet.

At the time, the Boxing Day shift was in full swing, and the mall was crowded with people. The Assistant Manager just so happened to be on this shift when Chris arrived.

While he claimed it was to purchase some Skylanders merchandise, it doesn't really matter what possessed him to go there; staff said they'd already caught him vandalizing Sonic Boom merchandise and had banned him accordingly. They had been on the lookout for him, suggesting this wasn't the first time he tried to return after being banned. Furthermore, knowing Chris's penchant for lying unconvincingly, committing further acts of vandalism may indeed have been his real agenda that day.

Whatever the truth, he entered the store wearing a pair of purple My Little Pony-branded sunglasses designed for little girls, apparently as a disguise. Naturally, he still stuck out like a sore thumb. After arguing with staff, he strode towards the store entrance, commanding the staff "Don't call anybody!" Just before he left, he brandished a pink can of pepper spray, and sprayed the assistant manager (or "Ass Manager," as Chris would later call him). The employee was later confirmed to be unharmed, although he did leave work after the incident.

Most of the information on what happened in the next hour comes exclusively from leaked, low-quality audio from a police scanner (below), and many details are uncertain. With his duty at GameStop done, and the police on their way, Chris returned to his car and left the mall. At some point after arriving at the mall and checking JCPenney and Sears, police determined that Chris had left the building around half an hour ago. The police talked with Barbara, who was still at the mall, eating, meaning Chris left his elderly mother behind, without a car to get home. Barb had little information to offer, except the make and color of Chris's car. Chris was arrested on the same day, at home.

On 28 December, a member of Kiwi Farms contacted Albemarle Regional Jail and confirmed that Chris was being held there, and was awaiting video court the next morning. A followup call from a 4chan troll[2] revealed that the GameStop's assistant manager would be pressing charges. After his weekend in jail, Chris was charged with his Class 6 felony, posted the $2,500 bail, and was released on recognizance. 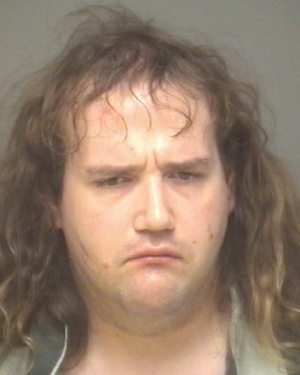 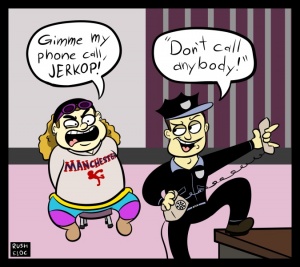 Expert recreation of Chris's first night in the pokey.

The Internet learned of the above drama when Tumblr user "monozettai" uploaded an on-the-scene video (below).[3] In the short clip, Chris, clad in full tomgirl regalia, throws away any pity points he may have earned by macing a man who is clearly not threatening Chris in any way. It later became viral and one of the most-viewed videos in Christory. Notably, Chris did nothing to get the video taken down, either because he was unaware of its existence or aware of the Streisand effect.

After the video was discovered by Christorians at large on 27 December,[2] monozettai's inbox was flooded with questions on his recollection of the event. This is what he had to say:

[A beep, most likely from the checkout machine, is heard as Chris walks near the camera. He blows a raspberry, presumably at monozettai, for a nanosecond as he passes the camera]

[Chris struts confidently towards the store entrance. Unintelligible background noise from other customers can be heard, a family at the counter look shocked and confused by the bizarre creature passing them.]

[Chris sprays the store's assistant manager, with pepper spray, causing him to quickly back away and raise his arms, probably in an attempt to wipe or rub his now maced eyes. A woman, likely the store's manager from Chris's description, walks into view.]

Manager: That guy wants to buy 2... [trails off, realizing what just happened.]

Soon after his release from the pokey, Chris rushed to his keyboard to perform damage control. Not surprisingly, he refused to admit any fault. Bizarrely, while he claimed ignorance to the effects of pepper spray, he also admitted that he had sprayed himself with the stuff several days before the incident. He also tried to blame the store employees for "intimidating" him, even though the footage does not support this claim, and Sega for changing Sonic's arm color in the first place. Unlike his previous run-in with the law, where he was at least smart enough to only mention the exact details in a personal e-mail to a close friend, Chris posted this to his Facebook page for all to see. Even his white knights condemned his actions. It seemed that this time around, everyone was against him.

This was the case against Chris, according to the Albermarle General District Court.

For a Class 6 felony conviction, Virginia sentencing guidelines recommend 1-5 years in prison and a fine of up to $2,500,[7] in addition to all the other corresponding losses he'd experience as a registered felon.

The 6th Degree version under the Virginia tear gas law is for cases in which the tear gassing was done "unlawfully, but not maliciously." Chris was fortunate to avoid the Class 3 felony version of the charge, which deals with malicious intent, and carries a much stiffer penalty of 5-20 years and up to a $100,000 fine. The law allowed Chris to plea down to misdemeanor-level assault and battery and be given a suspended sentence, with probation, counseling, anger management and/or community service in lieu of jail time. Ultimately, this is essentially how it turned out.

Having squandered Bob's inheritance on hiring Rob Bell after the 28 October 2011 incident, Chris was forced this time around to work with a public defender.

Chris Returns to the Front

On 3 January 2015, an e-mail leaked onto Kiwi Farms exposed that Chris had behaved in a bellicose manner at Wal-Mart on that date, and threatened to use his mace again. This was soon afterwards confirmed by Chris himself, who indicated that he wielded the pepper spray because it made him feel like a "badass." This statement worried many onlookers, as it suggests Chris perceived himself as invincible so long as he could issue credible threats. It was seen as a disturbing indicator that Chris's notion of his own infallibility and invulnerability, previously confined to the comics, had seeped into his conscious psyche.

On 11 January, Chris posted the following to his Facebook account, once again painting himself as the victim and wishing that people would like him, despite his past actions. He argued that nobody should be banned from a store unless they are carrying a gun. The post also addresses the completely unrelated issue regarding Chris's sexual identity, and frustration that he was not addressed by feminine pronouns (which he had only just started to use).

Chris had seven hearings related to this case, stretching into the autumn of 2015, before finally receiving a conviction.[8] His fans were frustrated at the slow pace of justice.

At the video hearing on 29 December (which only consisted of the judge setting bail/bond conditions and a date for the next hearing), Chris was released on bond. The following month he revealed in a Facebook post that, in yet another development mirroring 28 October 2011, the judge had placed a no-contact order on Chris as part of his bail conditions.[9] 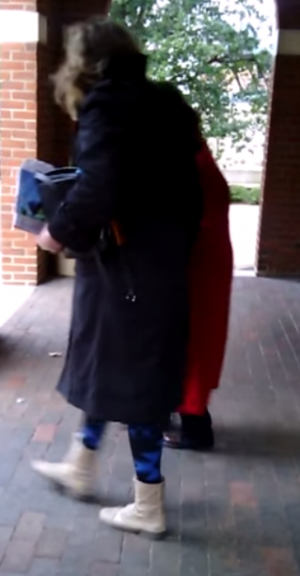 Chris and Barb leaving the courthouse after their 5 February hearing.

His next hearing took place on 5 February. It was decidedly brief, as the Chandlers appeared to have been assigned an unsuitable representative, and another hearing in April was scheduled. According to two Virginian Christorians in attendance, little of note happened except Chris and Barb forgetting the date of the next hearing and thereby pissing off the court by holding up the next case. Footage was taken of Chris and Barb leaving court, the first appearance Barb has made in Christorical media for almost two years. 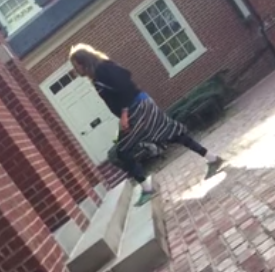 Chris began to attend his hearings alone, and reportedly seemed more nervous than in the last hearing. It began 20 minutes early and was over within minutes. In fact Chris left the courtroom before Christorians made it through security, so no one knows what, if anything, actually happened inside. What is known is that Chris was granted another continuance, and the next hearing was scheduled for 7 May. The account from forum member lipitor:[12]

The skinny according to heyyyJackiePie:[13]

True to the predictions of many, this hearing resulted in another continuance, until 11 June. It lasted longer than the previous one. Chris was again spied at McDonalds before the hearing. Forum member lipitor's account:[14]

This hearing was also quickly continued, until 23 July. The Christorian in attendance described Chris as uncharacteristically sociable and collected, perhaps because his forays in the Impulse Gay Social Club have made him more comfortable around people. The account:[15]

Another continuance, until 15 October, although the Christorian in attendance noted something was said about going to a therapist. Aside from this, he noted that Chris farted very loudly in the middle of court, accompanied by that signature sigh. Unlike the three previous hearings which Chris attended alone, Barb and a middle-aged woman thought to be Rocky were also there. The Christorian was also harassed by an unidentified young woman in red who tried to prevent him from filming Chris and Barb outside (where he had every right to do so) and asked about his behavior.

The real deal - Chris was found guilty. As many had foreseen, however, he was let off lightly. The Class 6 felony charge of "Dangerous Gas Unlawful Release" was amended to a charge of "Assault (Misdemeanor)." He was fined $541 and received a suspended sentence of 180 days, a sentence he'll only have to serve if he runs afoul of the law during his probation period. The terms of his probation were not clear. Chris sighed profusely as terms were discussed. Barb showed up this time. The field report from the Man in the Pickle Suit:[16] 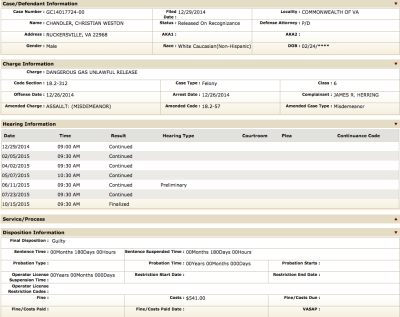 Final disposition of the case.

Field agent Rammspieler released a video of Chris and Barb leaving the courthouse after the hearing: 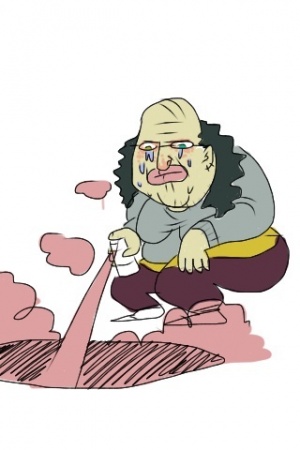 Artist's depiction of Chris disposing of the pepper spray.

A year after his assault crime, Chris commented on it in Group Embargo on GameStop, Best Buy, and Simon Shopping Centers. He claimed to be remorseful of what he had done and implored GameStop and Fashion Square Mall to unban him. He then followed up on his apology by threatening to accuse them of discriminating against "a high-functioning autistic, lesbian trans woman, famous author, with headache-inducing mental handicaps." Furthermore, he threatened to report the employee he had maced to the Better Business Bureau on suspicion that he had been holding a job at both GameStop and Best Buy.

Needless to say, Chris's bans were not overturned.

As for the mace, Chris claimed that he "had emptied the thing of pepper spray, downward into a nearby hole—big hole—outside, and disposed of said canister into the hole."

In the Internet Dream Lounge interview, Chris made a few comments on the event (and the protests in general) remarking that he regretted it. Given his ego, Chris unsurprisingly worded his description of the event as "someone ended up getting maced" and indicated that he was mostly irritated by being banned from the stores.