The autism papers are some of the most valued Holy Fails, in which the exact nature of Chris's psychiatric diagnosis is revealed by an objective source (as opposed to Chris's revisionist account of his life), and the extent of his autism (or whether he really is autistic at all) is explained.

To date, only an intake survey from 2004 is available, resulting from Chris's mandated visit to a psychiatrist after flipping out while attending PVCC. His original, earlier papers, dating to when Chris was five or six years old, remain locked away in Bob's filing cabinet. Ivy discovered that it is impossible for Chris to recover them himself, as Bob kept the keys on his person at all times. As a result of Bob's death, the keys are presumably in Barbara's possession now. Either way, these autism papers can be considered lost Holy Fails, due to Chris's paranoid nature and the fact that he'd actually have to put effort into finding them, not to mention that they may have been destroyed in the house fire in January 2014.

Chris was scheduled to receive a new mental health evaluation between August and November 2021, as part of his court hearings for incest. The results of this, or if it has taken place at all, are unknown.

In November 2009, Solid Chris e-mailed Kacey these papers to show that he is a TRUE AND HONEST autistic. Kacey shared these papers with her new husband, Liquid Chris, who in turn distributed them online. The papers are presented here in their original form, edited only for wiki styling and linking.

A number of passages of this copy have been outlined in yellow highlighting marker. Most of them either describe Chris's search for a sweetheart or contain some of the evaluator's more favorable judgments of Chris's mental state. A few are passages that confirm the diagnosis of Chris's autism.

To date, this is the only independent, professional evaluation of Chris's condition available.

Several observers have pointed out that these documents seem to paint a surprisingly rosy picture of Chris's behavior and mental state. It helps to keep a few factors in mind, though:

As trolls have learned over the years, he gets much worse with regular exposure. 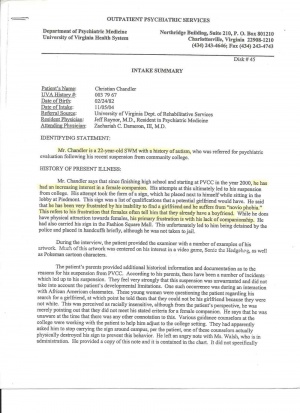 Mr. Chandler is a 22-year-old SWM with a history of autism, who was referred for psychiatric evaluation following his recent suspension from community college.

Mr. Chandler says that since finishing high school and starting at PVCC in the year 2000, he has had an increasing interest in a female companion. His attempts at this ultimately led to his suspension from college. His attempt took the form of a sign, which he placed next to himself while sitting in the lobby at Piedmont. The sign was a list of qualifications that a potential girlfriend would have. He said that he has been very frustrated by his inability to find a girlfriend and he suffers from "novio phobia." This refers to his frustration that females often tell him that they already have a boyfriend. While he does have physical attraction towards females, his primary frustration is with his lack of companionship. He had also carried his sign in the Fashion Square Mall. This unfortunately led to him being detained by the police and placed in handcuffs briefly, although he was not taken to jail.

During the interview, the patient provided the examiner with a number of examples of his artwork. Much of this artwork was centered on his interest in a video game, Sonic the Hedgehog, as well as Pokeman [sic] cartoon characters.

The patient's parents provided additional historical information and documentation as to the reasons for his suspension from PVCC. According to his parents, there have been a number of incidents which led to his suspension. They feel strongly that the suspension was unwarranted and did not take into account the patient's developmental limitations. One such occurrence was during an interaction with African American classmates. These young women were questioning the patient regarding his search for a girlfriend, at which point he told them they could not be his girlfriend because they were not white. This was perceived as racially insensitive, although from the patient's perspective, he was merely pointing out they did not meet his standard criteria for a female companion. He says that he was unaware at the time that there was any other connotation to this. Various guidance counselors at the college were working with the patient to help him adjust to the college setting. They had apparently asked him to stop carrying the sign around campus, per the patient, one of these counselors actually physically destroyed the sign to prevent this behavior. He left an angry note with Ms. Walsh, who is in administration. He provided a copy of this note, and it is contained in the chart. It did not specifically [continues on Page 2] 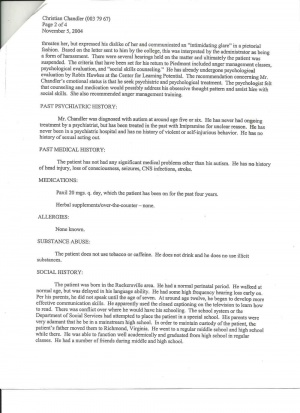 [Continuing from Page 1] threaten her, but expressed his dislike of her and communicated an "intimidating glare" in a pictorial fashion. Based on the letter sent to him by the college, this was interpreted by the administrator as being a form of harassment. There were several hearings held on the matter and ultimately the patient was suspended. The criteria that have been set for his return to Piedmont included anger management classes, psychological evaluation, and "social skills counseling." He has already undergone psychological evaluation by Robin Hawkes at the Center of Learning Potential. The recommendation concerning Mr. Chandler's emotional status is that he seek psychiatric and psychological treatment. The psychologist felt that counseling and medication would possibly address his obsessive thought patterns and assist him with social skills. She also recommended anger management training.

The patient has not had significant medical problems other than his autism. He has no history of head injury, loss of consciousness, seizures, CNS infections, stroke.

Paxil 20 mgs. q. day, which the patient has been on for the past four years.

The patient was born in the Ruckersville area. He had a normal prenatal period. He walked at normal age but was delayed in his language ability. He had some high frequency hearing loss early on. Per his parents, he did not speak until the age of seven. At around age twelve, he began to develop more effective communication skills. He apparently used the closed captioning on the television to learn how to read. There was conflict over where he would have his schooling. The school system or the Department of Social Services had attempted to place the patient in a special school. His parents were very adamant that he be in a mainstream high school. In order to maintain custody of the patient, the patient's father moved them to Richmond, Virginia. He went to a regular middle school and high school while there. He was able to function well academically and graduated from high school in regular classes. He had a number of friends through middle and high school. 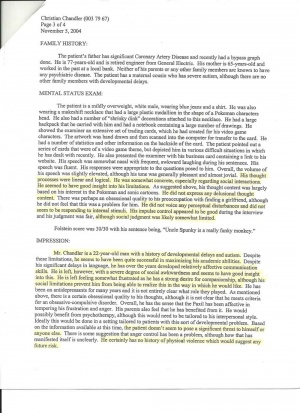 The patient's father has significant Coronary Artery Disease and recently had a bypass graph done. He is 77-years-old and is retired engineer from General Electric. His mother is 65-years-old and worked in the past at a local bank. Neither of his parents or any other family members are known to have any psychiatric disease. The patient has a maternal cousin who has severe autism, although there are no other family members with developmental delays.

The patient is a mildly overweight, white male, wearing blue jeans and a shirt. He was also wearing a makeshift necklace that has a large plastic medallion in the shape of a Pokeman [sic] characters head. He also had a number of “shrinky dink” decorations attached to this necklace. He had a large backpack that he carried with him and had a notebook containing a large number of drawings. He showed the examiner an extensive set of trading cards, which he created for his video game characters. The artwork was hand drawn and then scanned into the computer for transfer to the card. He had a number of statistics and other information on the backside of the card. The patient pointed out a series of cards that were of a video game theme, but depicted him in various difficult situations in which he has dealt with recently. He also presented the examiner with his business card containing a link to his website. His speech was somewhat nasal with frequent, awkward laughing during his sentences. His speech was fluent. His responses were appropriate to the questions posed to him. Overall, the volume of his speech was slightly elevated, although his tone was generally pleasant and almost jovial. His thought processes were linear and logical. He was somewhat concrete, especially regarding social interactions. He seemed to have good insight into his limitations. As suggested above, his thought content was largely based on his interest in Pokeman [sic] and sonic [sic] cartoons. He did not express any delusional thought content. There was perhaps an obsessional quality to his preoccupation with finding a girlfriend, although he did not feel that this was a problem for him. He did not voice any perceptual disturbances and did not seem to be responding to internal stimuli. His impulse control appeared to be good during the interview and his judgment was fair, although social judgment was likely somewhat limited.

Folstein score was 30/30 with his sentence being, “Uncle Spunky is a really funky monkey.”

Mr. Chandler is a 22-year-old man with a history of developmental delays and autism. Despite these limitations, he seems to have been quite successful in maximizing his academic abilities. Despite his significant delays in language, he has over the years developed relatively affective [sic] communication skills. He is left, however, with a severe degree of social awkwardness and seems to have good insight into this. He is left feeling somewhat frustrated as he has a strong desire for companionship, although his social limitations prevent him from being able to realize this in the way which he would like. He has been on antidepressants for many years and it is not entirely clear what role they played. As mentioned above, there is a certain obsessional quality to his thoughts, although it is not clear that he meets criteria for an obsessive-compulsive disorder. Overall, he has a sense that the Paxil has been affective [sic] in tempering his frustrations and anger. His parents also feel he has benefited from it. He would possibly benefit from psychotherapy, although this would need to be tailored to his interpersonal style. Ideally this would be done in a setting tailored to patients with this sort of developmental problem. Based on the information available at this time, the patient doesn't seem to pose a significant threat to himself or anyone else. There is some suggestion that the anger control has been a problem, although how that has manifested itself is unclearly [sic]. He certainly has no history of physical violence which would suggest any future risk. 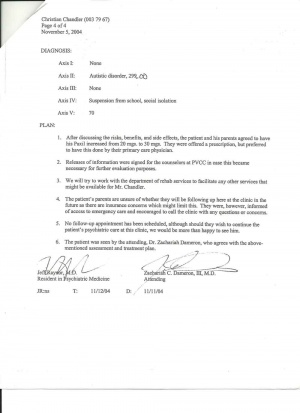 1. After discussing the risks, benefits, and side effects, the patient and his parents agreed to have his Paxil increased from 20 mgs. to 30 mgs. They were offered a prescription, but preferred to have this done by their primary care physician.

2. Releases of information were signed for the counselors at PVCC in case this became necessary for further evaluation purposes.

3. We will try to work with the department of rehab services to facilitate any other services that might be available for Mr. Chandler

4. The patient's parents were unsure of whether they will be following up here at the clinic in the future as there are insurance concerns which might limit this. They were, however, informed of access to emergency care and encouraged to call the clinic with any questions or concerns.

5. No follow-up appointment has been scheduled, although should they wish to continue the patient's psychiatric care at this clinic, we would be more than happy to see him.

6. The patient was seen by the attending, Dr. Zachariah Dameron, who agrees with the above-mentioned assessment and treatment plan.