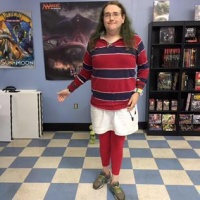 At his Pokemon club.

Z-Ring Fun Extra was a video created by Chris on 30 December 2016. This was his last video of 2016. In the video, he talked about some extra things you can do with the Z-Ring, an accessory designed for Pokémon Sun and Moon. He was pictured wearing it at The End Games.

The ring became something of an accessory for Chris, like a clunky piece of costume jewelry. He wore it to BronyCon and was photographed wearing it by the newspaper Daily Progress at Cville Pride on 17 September 2017.

Hello, everybody, this is Christine Weston Chandler coming to you live from home once again, and over the Christmas holiday, I've, uh, I'm just getting myself my own Z-Ring bracelet! And of course, um, before the month came- before the month came in, I had traded many games, got my copies of Pokémon Sun and Moon. Of course you all know from everybody on the Internet what this thing does. [Chris points to the Z-Ring bracelet on his arm] [unintelligible] Pokémon Sun and Moon, which I'm gonna demonstrate for you in a little bit with my... Favorite- with a- [Chris opens his 3DS towards the camera and starts tapping on it] with my female Primarina Ariel. Anyway, so... Yeah, you know what day, so... [The bracelet blinks] Yeah... [Unintelligible, likely a pokémon] and [unintelligible, likely a pokémon] are my favorite... [Chris pauses to show the attack play out on his 3DS while his bracelet flashes] I love it because it's so musical. [He does a silly pose when the long chime plays] Musical energy, rockin'! [He raises his arm up in another pose, then wiggles his fingers to the twinkling sounds] Raindrops make applause. [Chris closes his DS, knocking his Christine Doll over in the process] And then I knocked myself over... [He fiddles with the figure for a minute]

Anyway, mmm... Okay. So, anyway, aside from that, something else fun I actually was able to do, also. [Chris pulls out his phone] I downloaded the Pokémon Sun and Moon Super Music Collection from iTunes. Mmm... [Chris blows on his screen] Oh well... Mmm-you can Google it, y'know, look it up on iTunes. Pokémon S-sun and Moon Super Music Collection. Anyway, so, yeah! The final six tracks in this collection... Which are- which are amongst the bonus tracks, they actually sync up with the Z-Ring. [The Z-Ring starts to play music. Chris grumbles and stops the music.] I did that wrong. But you can have it on roleplay mode, the opposite side from the 3DS mode... Yeah. So, anyway, y'know... [The music begins again, Chris smiles in accomplishment] Now look at the red logo, and... Well, [unintelligible] [Chris proceeds to fiddle with the Z-Ring] And then I got... get out of that, pressin' the button... [Z-Ring flashes in response]

Anyway, something else- anyways, so this informative video, I tell you a little bit about something that I was able to do... uh, the, uh, six bonus tracks that sync up with the Z-Ring. I- in the iTunes program, I've, uh, learned how to separate, uh, isolate numbers through the option under "get info." I made ringtones! That literally sync- that literally sync up with the Z-ring... And among which I found that within the first three seconds of the Pokémon Center song, it's good enough, it acts like a pager, it just makes it buzz... I don't know if you're able to hear it, but it- but it buzz buzz buzz. Which, of course, you know, that's not the first three seconds of the full Pokémon Center, which I got the first sec- three seconds of that as a ringtone by itself. [The beginning of the Pokémon Center theme plays on the Z-Ring] Hmm, it's br- it's not happening again. It's kind of hit-or-miss, at least we're... kind of hit-or-miss sometimes, but we'll work around it. It does make for a good companion for when you do ringtones. And, I man- you could even manage to s-isolate the one seconds, uh, some of them that... should make the thing light up and sync to that... one second of the track! [Chris puts his bracelet up to the camera] Over here, that- well, just... listen up. [Music, a Pikachu can be heard] Y'hear that? It my Pi-ka-chu after that one second bit out of the, uh, wild Pokémon battle.

So anyway, that is something neat [Chris taps his Z-Ring twice to "something neat"] that you can do... [He taps it a couple MORE times] To s-set up, you can set up your ringtones out of the bonus tracks in the Super Music Collection. Download it, or buy the CD's, if they're available on physical disk... But, uh, I sure hopefully that would- hopefully that is because that would be easier to, uh, work around. Anyway, just isolate... [Chris waves his hand around] The, uh, seconds, and turn them into... [Nonsense syllables] And for our ringtones. You can copy them to your phone! Simple as that, or at least, or varying upon... Anyways, so depending on your software or whatnot. So that is something else, something secretive and fun feature, that you can do with the Z-Ring. Anyways, I just wanted to share that with y'all, for this time, and, uh, tune in next time soon, because I'll finally be able to [Chris slams the card in his hand on the table] reveal the full-size figure of myself. And I'm wait- I'm still waiting for that, taking- it takes a long time... To make that figure. Hmm. Longest time versu- versus the card to the t-shirt. Oh well. Anyway. [Salute] Thank you and have a good day.