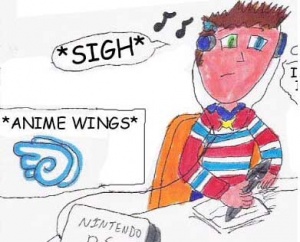 The Anime Wings are a pair of wings Chris got at Anime Mid-Atlantic convention that are clipped on to the hair. This accessory is usually worn by women; specifically, otaku fangirls (well, really, how often do men wear hairclips?). Chris's pair somehow turn real when he transforms into Super Chris-chan Sonichu if he transforms while wearing them. This gives Chris-chan even more god-like abilities, granting him the power to fly.

The wings first appeared in Sub-Episode 4 and are promptly knocked off of his head at the beginning of Sub-Episode 5, where they are... destroyed? Lost forever? Forgotten? Either way, Chris-chan Sonichu has been shown to be perfectly capable of flying without them (probably because it's easier to draw).

The wings are one of several accessories, along with the medallion and the Amnyfest Ring, which he hopes will allow him to magically transform into someone other than himself. To date, none have done the trick. 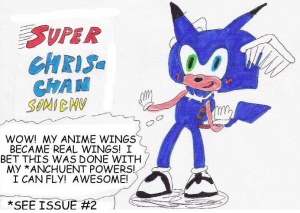 With the Anchuent Powers, Chris-chan can transform into Super Chris-chan Sonichu if the Anime Wings are on top of his head. They appear to be similar to Angelica Rosechu's. As the transformation would make him super, and thus more powerful than his original form, he would be wise to use this to his advantage in future comics. But alas, this concept was completely forgotten by Chris, just like the plot in Sonichu. Honestly, what happened to Metal Sonichu?

Another note to be made is that Chris-chan cannot come up with an original idea, so this had to be ripped off from something else. Due to his influence with Nintendo, he most likely got the "Super" part of the name from Super Nintendo and the many SNES titles that included "Super" in their names. As for the actual wings part, it is probably stolen from Super Mario Bros.'s Koopa Paratroopas/the Wing Cap from Super Mario 64, or from some anime.