Zapina is a fourteen-year-old Rosechu who longs to strip for women's rights. She's part-insect somehow, meaning she has wings and her ass glows. She is best friends with Simonla, and refers to her as her sister.

Like Sandy Rosechu, she is one of the only non-Sonee & Rosey underage Rosechus. The exception here though is that Zapina is not a psychopathic serial killer in the making. 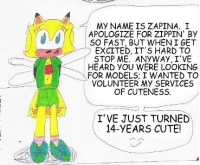 Originally, Zapina did not appear to be ripped-off wholesale from any other existing character. She has the yellow color and ears of Pikachu, as well as the eye style of a Sonic character, but the fact that she's part-insect seemed original. Until people remembered that Charmy Bee exists. At this time, Generation 3 of Pokémon had been out for several years, with Firefly-Pokemon Illumise (female) and Volbeat (male). Zapina looks nothing like either Pokémon.

Despite existing solely as a means for Chris to somehow disprove criticisms on pedophilia, she is easily the skankiest-dressed Rosechu in the series; she sports daisy-dukes and a low-cut, midriff-baring tube top, which no responsible parent would let even a high-schooler near, and appears to be wearing makeup at points. In newer artwork, Chris has drawn her wearing more conservative clothing.

In October 2017, Chris created a "short" backstory for Zapina and Simonla, explaining where they came from and their relationship to one another. His post said:

In her description on her Twilight Sparkle's Secret Shipfic Folder card, it stated that she was mentored by a Bugzapp (one of Chris's original pokemon) and a Beedrill.[2]

Like all the other Rosechus, she is extremely shallow with no real personality. Chris describes her as fast-talking, very energetic, spunky, and inquisitive. In his October 2017 post about her backstory, he mentions how she had to fend for herself in the wilderness, until being found by Simonla and was taken in by her. Chris had an opportunity to make a well-fleshed out character. Since Zapina grew up alone and had to fight to survive, she would more than likely be very cautious of other people and since she bonded with Simonla, she would probably be the only character that Zapina could trust. Instead, Chris chose the easy path, and what he believes women to be like, giving us another forgettable and unremarkable character.

At the gals' protest strip for women's rights, Zapina begs the fascist Rosechu to allow her to get naked for the camera. Sensibly, Rosechu won't allow her to be present (citing "dumb laws"), until Lolisa Rosechu promises to "look after" her. She helps by using her powers to provide light for their horrifying strip protest.

In the dating education episode, we see Simonla Rosechu outside CWCville U talking to Zapina. Zapina refers to Simonla as "her best friend" which is creepy enough, before Simonla instructs her to get a "16 year old boy".

While not making any appearances, Zapina is mentioned as having become Sandy Rosechu's babysitter and mentor.[4] This presumably means that Sandy will be fighting for women's rights from the tender age of one year.

In the newly resurrected Sonichu '11, Simonla is revealed to have survived her death in Sonichu #10. When she returns to society, Zapina hugs her and calls her "sis." 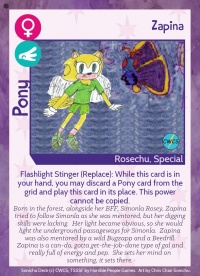 There are three Rosechus who have implied they would like to sexually exploit Zapina. The first is Rosechu, who mentioned those gosh darn laws; second is Lolisa, who says it's A-OK for a child to be around women stripping nude; now Simonla seems to be trying to nudge Zapina into a sexual relationship of her own.