Uploaded on 29 November 2009, Mailbag 7 was the seventh batch of letters for Chris to answer/censor.

This mailbag contained several encore appearances of people featured in previous mailbags, namely the devout 14-year old girl, aspiring artist Emmy Bardot, and Alaskan native Levi Johnston. There were a few emails carefully designed to gently bring up topics that Chris was in serious denial about, such as his obesity. There were also a few weird ones, like a Muslim boy's life being put in jeopardy by his love of Sonichu, and some wacko promoting 2D love.

Chris was scheduled to answer them all on the 29th, but he didn't actually get around to it until 1 December. His responses were more pompous and condescending than ever. The irony in lecturing about employment and cleaning seemed to be completely lost on him. He responded to the second letter in the mailbag by explaining why he was fully justified in closing his mind to the idea of autism and Asperger's Syndrome being similar; then in the very next letter, he berated someone for following a closed-minded religion. Presumably, Chris wanted her to open her mind and her vagina. Other highlights included Chris desperately trying to come up with ways the Rosechus are different, and claiming that Albert Einstein was autistic.

An inkling that this is a joke letter

The Rosechus are totally diverse and stuff

Yes you can sail the seven seas 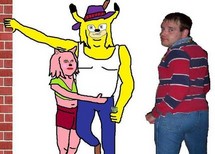 In which Chris destroys an Iranian family

GET A JOB, DUDE

For Truth and Honesty, see the archived CWCipedia page on Mailbag 7
Retrieved from "http://sonichu.com/w/index.php?title=Mailbag_7&oldid=253747"
Hidden category: