In March 2010, the troll Surfshack Tito exchanged a series of e-mails with Chris. These were leaked on 18 March 2010, to the amusement of all and sundry. They are reproduced below, with Tito's messages on a red background and Chris's replies on a blue background.

There's not a great deal of genuinely revealing information in the e-mails, although Tito's mockery is good for a chuckle regardless. We do learn, however, that Chris was aware of the Wallflower's obsession with gay fan-fiction, and it apparently didn't bother him (or it didn't bother him enough to deter him from his quest to get laid, anyway).

An image accompanied the above e-mail, a picture of the Wallflower with some big guy who looked Polynesian enough to pass as an IRL Tito. Chris replied with: 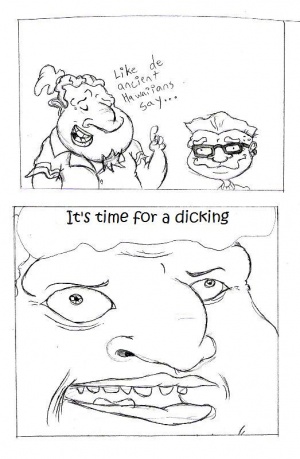 True words to live by. 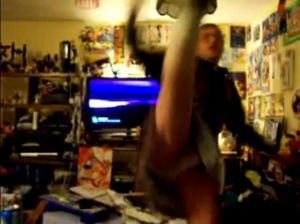 We apologize for making you see this again. It was necessary.

Tito would not be drawn out, however: 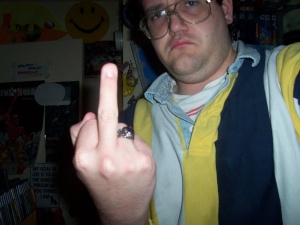 After the break I'm gonna soak my arm in kerosene, light it, then fistfuck a goat.

This managed to get Chris's dander up, leading to three e-mails in succession, as well as an attached image of Chris delivering the "fucky finger." Exactly what the "Meet and Greet" Chris refers to might be is uncertain. It could be some sort of event involving the "Young Adult Social Group" through which he met the Wallflower, or Chris could be abusing yet another figure of speech — i.e., he plans to "Meet and Greet" Tito, then log-roll/pocket-knife/whine him to death.

At this point, Tito had had enough:

Chris handed down one final reply: