Mailbag 1, created 19 November 2009, was the first Mailbag posted on the CWCipedia. Chris only answered the ones that lavished the appropriate amount of praise on him, and deleted all the others. Highlights include Chris promising to bring back Sub-Episodes (which he never did), dodging questions about race relations, and babbling about making a cure for homosexuality. 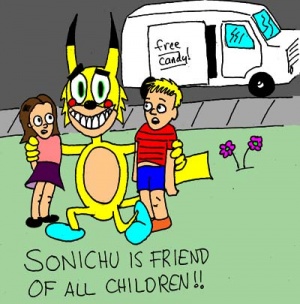 The Italicized part of this email was deleted by Chris, who cannot handle criticism.

Chris on racism and evolution

The cure for homosexuality

In which Chris plans to steal a plot

Chris is alive so quit bitching

Bring back the Luv Shack

Choose your own adventure

For Truth and Honesty, see the archived CWCipedia page on Mailbag 1
Retrieved from "http://sonichu.com/w/index.php?title=Mailbag_1&oldid=272757"
Hidden category: