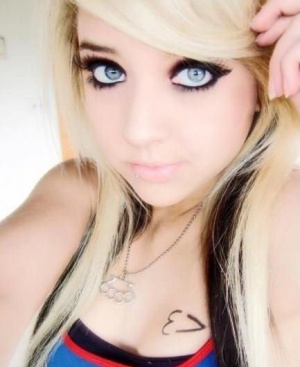 In the wake of the Jackie emails, on or about 22 April 2010, a brave woman named Sydney Kirsch mistook Chris for "another Chris" at The GAMe PLACe, with whom she had intended to do some Pokémon-related business. Since she had forgotten this handsome, devilishly charming man's email address, she simply searched up Chris and The GAMe PLACe then emailed the first place that came up. The following is a record of what took place.

Sydney had the noble end-goal of wanting to get Chris to resume answering the Mailbags, by trading naked pictures of herself for answered questions. Unfortunately, things did not turn out that way at all and, ultimately, this was a rare win for Chris. His smugness at (finally) uncovering a troll is still chuckle-worthy, as is his mention of his cleavage (or, as normal human beings might put it, shockingly colossal man-boobs).

Some subject matter (mostly audio clips and voice mail messages) have not been posted because they are mostly irrelevant, don't add to the story and/or don't contain input from Chris. Note that the date and time stamps on emails are for Virginia time, while the date and time stamps on audio clips are Adelaide, Australia time. The woman herself quite happily admits that there is not a lot of new information about Chris in these documents, and that the CWCki exists to document Chris, not failed troll attempts. However, making the information public will hopefully make it clear that Chris is beginning to adapt, so just remember, nobody trolls Chris quite so well as Chris.

Chris sent his Hook Cafe image to Sydney, acne scarring and all.

What a sexy, sexy man

Sydney sent this modest picture in reply. Chris would later compliment her on her appearance, but either not read the text body of her e-mail at all or, if he did, not remember even a single detail about her. Hmm.

Houston, we have liftoff!

[TL;DR it's just an infodump about Sydney, her likes and her dislikes, etc. Note that the lack of apostrophes in this e-mail was due to user error.]

[Note that Chris, despite predicting that Sydney would call, apparently has no idea who she is until he gets some serious prompting... and even then he's not 100% sure.]

Chris: Yeah. Is this Sydney?

Sydney: This is Sydney. Yeah. Hey. Oh my God.

Sydney: I finally get to speak to you. I am so happy.

Sydney: I mean [unintelligible] for a while. [Sydney said, "I've been meaning to get in touch with you for a while", but the audio cut out for a second.]

Chris: I mean, well, uh. Yeah, well, I mean, uh. I have... I have received your emails and upon my recollection, I don't recall talking to you through email before you sent the email recently, so I am uncertain about... things. So forgive me for being skeptical.

Sydney: Do you remember?

Sydney: I went to The GAMe PLACe. I mistook you for someone else.

Sydney: Okay. Um. Well, anyway, um... I'll... I'll remind you if you like. Um, what happened is we um... I met another guy called Chris uh at The GAMe PLACe and he was selling some Pokémon cards and I thought it was you. Um, 'cause I just Googled Chris and the GAMe PLACe and it came up with you. But you said it wasn't you, and that pic-

Chris: Oh, oh, oh. Oh, I see. Okay, yeah. Yeah. Uh. Yeah, basically put in a nutshell, Michael was scared of me and and uh, he was afrai- and he was uh, preoccupied with his crackpot theory of me scaring his- scaring his... customers away, so he banned me from the store.

Sydney: Look, um anyway... Hey, look you sent me a picture um... I really liked your picture. You're very, very handsome. Have you ever been told that?

Chris: Hmm. Yeah, I have been told that, mmm. Thank you for the compliment.

Sydney: Yeah, yeah. Um. It's an old picture. I'm sorry I didn't have a more recent one. Um. I have other pictures... that are more recent, but I look... I think I look okay in that picture. My ex-boyfriend took it.

Sydney: And it's been- it's been heavily airbrushed it, but it is me.

Chris: So, uh, yeah... So, at this point, you wanted to uh hook up with me or something? I just wanted to make sure I understand. [Sydney talks over Chris] The uh... at this point...

Chris: [Incredulous] You would... You would like to hook up with me?

Sydney: I would... Wow. I tell you what, if you would date me, that would be really, really impressive. I... You're a very attractive man and I'm really nothing special, so...

Sydney: [Sydney begins to talk over Chris, but Chris wins] But I mean look, let's- I do think-

Sydney: Absolutely. Um, I actually, I work as an airline hostess. I'm actually out of Charlottesville at the moment. Um... but, if you wanted to um... I'll-I'll be back in like, you know... maybe like 8 or 9 days. It depends on what my work does. Um. I travel a lot.

Sydney: Uh, but if you... I can check my email like all the time, so if you wanted to email me while... 'Cause, look, I really want to know more about you and I would love... dating you. Um, you're obviously an attractive man.

Chris: Yeah. All right. Well, listen, I got to go, but it was nice talking to you so, you take care and have a safe day.

Sydney: All right. Email me, okay?

Chris sent an email to Sydney immediately after the call. Notice how he simply copies his dating profile page into the email. He's too lazy to even talk about himself.

Things are going along smoothly, right? In a rare display of awareness, Chris became wise to the trolling plans that were forming against him, and quickly attempted to amputate the attempt at its source. However, this awareness would soon fade.

Chris: Hello?
Sydney: Hey, Chris. This is, um... Sydney. How are you- how are you goin'?
Chris: Um... yeah. I'm, so- Uh, listen. I know about you and your little game. I've read the troll forum. You're actually in Australia. You cannot fool me anymore. Goodbye.
Sydney: Um... Yeah, I- I am Australian.
[Tape cuts off]

It is probable that, after her dismal failure, Clyde Cash had the woman broken dead. Such is the fate of those who fail Clyde.