Breast Cancer Awareness is a video Chris uploaded on 18 October 2010. Chris has stuffed his muscle bra, likely with the plush breasts as seen in his previous video, and speaks for a few moments about the dangers of breast cancer. 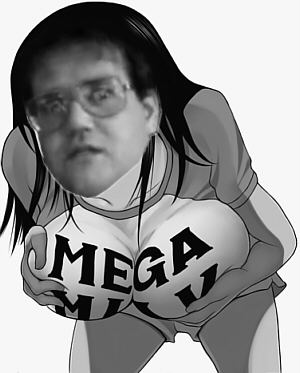 [Chris is sitting in his kitchen with his shirt obviously padded to make it appear like he has very large breasts. The radio or television is playing loudly in the background.]

Seriously, though, folks, there is something else that you should be aware of [He scratches his nose and glances off-screen.] you know, breast cancer. You know what that's both us both males and females, regardless of size. [He adjusts his fake breasts, pauses, then chuckles briefly.]

Anyway, make yourselves aware of this. You should feel your tatas. [Cups his own fake breasts, then delivers a creepy stare at the camera.] Feel your breasts. Check to see if you have any lumps, they could be breast cancer. You never know. If you suspect breast cancer, go get yourself checked out with a doctor. Breast cancer awareness. [Draws a ribbon in the air with his fingertip.] Pink ribbon.

[Cuts to a closeup on his chest, fake breasts still intact. Radio/TV is no longer in the background.]

Hey. Hey hey. Hey! [He grabs the camera, pointing it towards his face.] Eyes up here, buddy-[Feed cuts before he finishes speaking.]

The following items are present in this video: