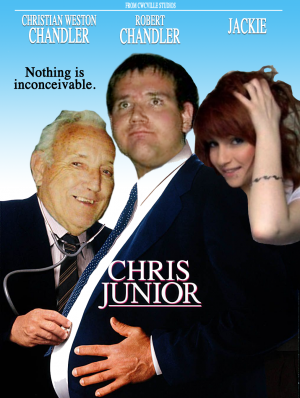 Pregnant Act is a creepy video Chris uploaded on 18 October 2010. The scene begins with what amounts to a biologically impossible (on multiple levels) self-impregnation, with Chris having received what is presumably Jackie's egg cell, which he has fertilized with his own navy. The 'pregnancy' is given form by padding under Chris's shirt, including the plush breasts.

Having effectively screwed himself, the next scene has Chris on his back, futilely attempting to right himself. Next comes the birthing scene, Chris now pointing the camera at his own crotch, and completing the birth by tossing a teddy bear onto his knees.

Finally, Chris has his stomach exposed, and the plush breasts stuffed down his sports bra, while he forces the bear to suckle from his teat. The "newborn baby" then says its first words. 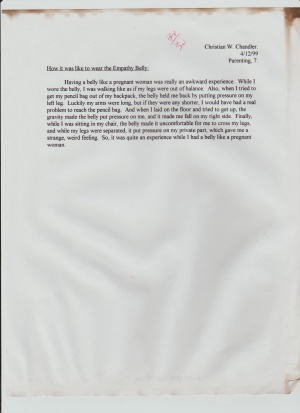 Chris removed the video the following day, and uploaded a newly recorded version shortly after.

The video was inspired by the supposed travails of Jackie's aunt and uncle.[2] 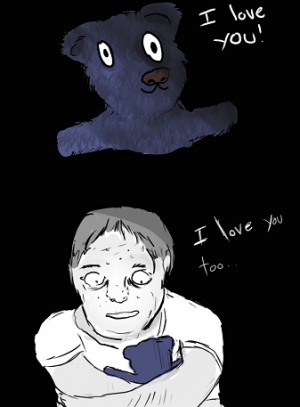 Oh my god... look at me! Huh! My girlfriend reverse-impregnated me! The egg came out of her, and got into me! When we were having sexxxsss... oh my gosh. Goodness... [camera fumbling then jump cut]

Hm. Ugh. Goodness it's difficult to get up these days, with number one in the way. Oof! Little heavy made me fall down. Made me fall down! [camera fumbling] Maybe I try... and see if get up. Oop! I fell down again! [mumbling] Let me tell you... oof! Ahh! [grunts, then jump cut]

Oh my goodness, it's a big one! [grunts, strains, and mumbles] Must watch breath... one two three! [gasps] EEeeaaahhhhgh! Ah! [throws a stuffed bear onto lap] Well! Congratulate me! I gave birth to a little beautiful baby... bear. And she's female! Goodness... wow. [jump cut]

Chris removed the original video on 19 October, and uploaded a new version of the video shortly after. Now with improved lighting, and a more detailed explanation. And more creepiness, too.

Oh my goodness me look at this I had sex with my girlfriend and it backfired on me, can’t believe this. Her egg went inside my dick and now it’s- now it’s been in me for like 9 months.

Well will you look at that, I gave birth to a beautiful baby... girl bear! [Chris has his shirt pulled up, exposing his muscle bra and pale fish-belly, the bear is pressed up against the plush breasts] You- no- little baby's drinking my breast milk. Yeah you enjoy that don’t ya? My lil- my lil girl.