Shout out to Fans in Hospital 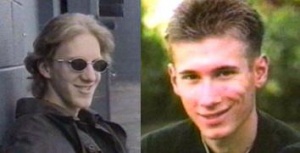 Now where have we seen these guys before...

Chris was a 17-year-old junior in high school in 1999 and the shootings received in-depth national and international coverage. Also, the event's tenth anniversary was widely commemorated in the national news a few months before Chris made this video.[1]

This video was recorded in Chris's kitchen at the family computer.

Greeting, my fans [flashes ring of fail]. Not really a Captain's Log, but more of a shout-out. I just received a, uhh, message in the mailbag, and I feel like it's appropriate. Ya know, a couple of Sonichu—couple of my fans, uh, wanted to go to a high school in New Mexico—by the names of Dylan and Eric. They just recently have been in a terrible car accident, and they are in the hospital right now. So listen to them, Dylan an—Dylan and Eric—Dylan—Eric, [gives a thumbs up] stay strong. You'll pull through. It's just a small assinent. [takes glasses off] You'll be okay.

Hey, stick around. You got a lot—you got a lot—a lot to look—to look forward to. And plus your family and your friends need you. [dramatically puts glasses back on]

Anyway, I appreciate y'alls, uh, [TV says, "Are you going to kill someone tonight?] patronating everything. And I saw—wish to... everyone... and Dylan and Eric... a merry Christmas... [gives a peace sign barely visible to the camera] and happy ha—and happy Hanukkah/Chanukkah—all the other holidays to everybody of other religions.

Okay, alright. Everybody take care, and Dylan and Eric... [shows fist with the Amnyfest Ring in an aggressive gesture] Ho-get well soon.