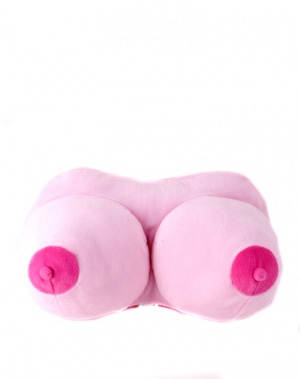 The Plush Breasts, as available from Spencer's.

Chris's pair of Plush Breasts is a pillow in the shape of human breasts and the color of Rosechu, purchased at the adult novelty section in the store Spencer's.[1] It normally resided by the right-hand wall of Chris's room as one entered the door, next to one of his racks of games and videos, but subtle changes in its orientation over time suggest that Chris has picked it up and used it for… something.

It first appeared in the middle of October 2009, in the War Paint Video. Spotting the breasts in Chris's YouTube rants quickly became a popular pasttime among trolls.

While designed to be an adult novelty, something along the lines of a gag gift you would see at a stag or hen party, there lies a possibility that Chris used this as one of his sex toys. His "BANGIN' YOUR BREASTS" fantasy during the Kacey Phone Call lends itself to the suspicion that he might have used the plush tits for practice.

Another possibility is that the plush breasts played a role in Chris's cross-dressing. Between 18 and 30 October 2010, in no fewer than eight videos, Chris presented himself with the breasts stuffed in his shirt. In most of these videos he was role-playing as female characters. For example, in Pregnant Act, they were used to breastfeed a blue teddy bear. He also wore them in a video concerning Breast Cancer Awareness. However, all of these videos were specific requests of Jackie, and Chris has never been seen wearing the breasts since, despite the acceleration of his feminine trajectory.

The only possible exception was on 26 December 2014, when police reports indicated that he was wearing "fake breasts." This opens the possibility that the plush breasts had not been destroyed by the 14 Branchland Court fire. However, in the video of Chris's GameStop adventure, while his shirt might be stuffed, he is nowhere near as bosomy as the plush breasts had made him in the earlier videos, so it's unclear if Chris has indeed resumed using the Plush Breasts, or if his ballooning chest is simply due to his ever-increasing corpulence.