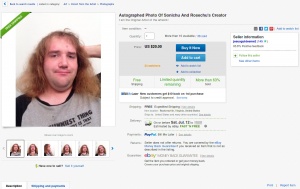 Screenshot of the listing 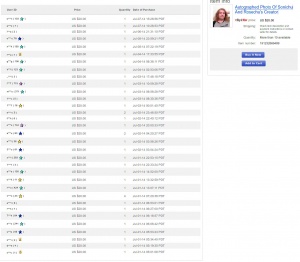 Purchase history for the listing.

On 1 July 2014, Chris created an eBay listing for autographed photos of himself. He apparently learned from the multiple failed listings of the Original Sonichu and Rosechu Drawing, since he did not allow bidding on the listing. Instead, he set a comparably reasonable Buy It Now price of $20 for each photo, with immediate payment required, making it less susceptible to trolling. In the Q&A for the listing, Chris indicated that he would wear the Sonichu medallion on request, but that his "The Classic" shirt had been lost in the fire. By the time sales were temporarily suspended in November 2014, 104 photos had been sold, several to CWCki Forums members.[1] In June 2015 he inaugurated a new eBay account with a listing of autographed photos, managing to sell four.

He resumed selling autographs in 2018, which proved to be a popular item that year.

Revised description as of 24 July:

Evidently Chris seems to think that people who bought photos also follow him on Facebook, because he addressed his buyers in general there regarding the status of orders. On 3 July, he stated that he has "filled every order" and yet "still [has] more to do", including packaging and shipping. He complained that a flash flood warning and the 4 July post office holiday would delay him. Despite this, several orders were shipped on 3 July, and at least one arrived as of 5 July (showing him wearing the Sonichu medallion as promised).[2][3][4]

Chris resumed selling autographs in the summer of 2018, first through Mercari and then ebay. This time around, the autographs were all based on one photo (with the occasional variant poking fun at his own past), framed, with the only customization offered being which version of his name he would sign. He charged $50 for each and included three Sonichu stickers as a bonus. The standard autographs were quickly snapped up by fans. 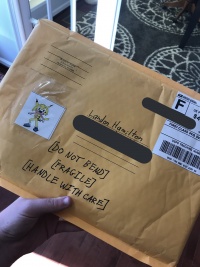 Photo of a received envelope in which the frame allegedly broke in transit.

Chris decided that shipping the framed autographs in an envelope lined with bubble wrap would be sufficient if he wrote "fragile" on it. This led to complaints of the products being damaged in transit.

Chris replied to one of the complaints on Twitter, managing to blame the customer and the postal service instead of himself[5]:

He has yet to receive negative feedback on this faulty shipping method on his ebay account. One buyer, who noted the damaged frame in feedback, nevertheless rated the transaction positive[6].