The following are a series of posts by Chris on Facebook in July 2014.

This was quickly followed up by: 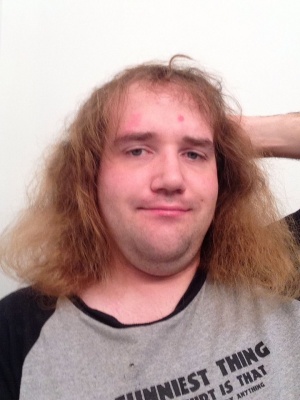 To which Kim Wilson replied:

Rage about the legality of the Jazz CD set

Chris's report card for Mrs. Dorazio's English class had been leaked the previous month, so Jon may have been lying about having been in Chris's class.

I'm working on it!

Shortly afterwards, Chris wrote another post on the subject:

Spirit Plumber replied to Chris with the following comment:

"Sweethearts Playing a Round"

The sale is extended

My mother and I still need the money

A local news story stated, "Virginia State Troopers are competing with state police agencies across the country to see who has the best looking cruiser." Chris responded:

But he's young at heart

The Skylanders Game page asked fans how old they were. Chris said: