The band in question, L'eclipse Nue (https://www.facebook.com/pages/Leclipse-Nue/189265644421174?pnref=story), had announced on Facebook the previous month:

When their album came out, they posted: 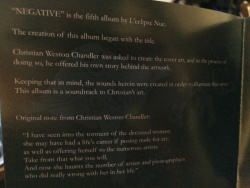 The liner notes to the album show that the entire album is actually about Chris's art, and feature a contribution from Chris:

Reopened for Business on eBay

To which Chris replied:

Chris Needs a Hug (Women Only)

Chris commented on a piece of Equestria Girls fanart, which had been posted with the comment, "Poor Pinkie. Won't anyone give her a hug?"

Hidden Meanings in My Little Pony?

Chris watched the trailer for season 5 of My Little Pony: Friendship is Magic[1], and commented:

Chris was probably wondering if this image from the trailer:

was meant to allude to the symbol of the Human Rights Campaign:

Tribute for a Fascinatingly Illogical Man

Chris shares an article on the death of Leonard Nimoy, best known as Spock from Star Trek. Link here.