The following are a series of posts by Chris on Facebook in October 2014.

Chris uploads a couple of pictures of himself frowning deeply and brandishing a plush Sonic. Of note is the filthiness of his receding hair and the fact that despite being made for a female, the shirt he is wearing does not properly contain his breasts (or indeed the rest of his torso). He issues a death threat to every single person working at Sega.

William then called him out for his ridiculous overreaction:

I Love You, Catherine

Chris makes a remorseful post for his sweetheart Catherine with a link to an accompanying video. In it, he apologizes for having characteristically assumed the worst of a male friend of hers and reveals he is in an "open relationship." 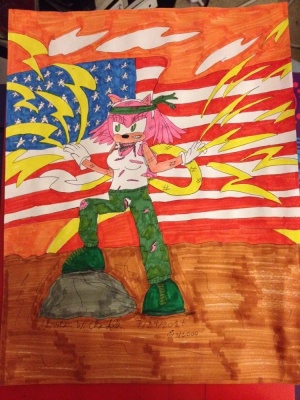 Chris Forgets That It's Columbus Day

Too Successful for His Own Good

The Anti-Carcinogenic Properties of Hanky-Panky

Hold Back the Money

Waiting for Someone to Pick Up

Chris is inconvenienced by phone operators and naturally blames it on his customers who are providing him with his livelihood.

Chris tactfully deems the fictitious sentiments of a cartoon dog and the bottom of a cereal box to be highly relevant to the plight of systematically oppressed people the world over.

Chris discovers the GamerGate movement after reading the Wikipedia article on it. GamerGate as a movement could warrant having its own dedicated wiki, but for the sake of precursory knowledge and context, GamerGate is argued by its supporters to be a movement against corrupt journalism and favoritism in the games industry regarding coverage, and by its detractors as an inherently misogynistic movement which only seeks to exclude women from the video game industry.

Chris deems it to be the latter, and decries the trolls, cyberbullies and JERKS whom he believes to be participating in GamerGate. Owing to his recent identification as a woman, it can be safely assumed that this statement was motivated by egotism and his desire to play the victim.

The Cure for Autism

Chris rants about finding the cure for autism and equates having it to being cursed. He also personifies autism by creating a Mii for it and proceeds to beat it up in Super Smash Bros. It seems that his habit of personifying his enemies and beating them up in video games isn't just limited to people, but also includes neurological disorders.

Ultimately Chris will be unable to come up with the cash to attend the conference.

Chris took a photograph of his computer monitor playing the Family Guy episode "Baking Bad" on Hulu Plus, and posted:

Chris then linked to an Animation Domination High Def YouTube video called "Every Day is Scary," about the tribulations of adulthood.

But then everything is better again.

Chris dons some purple leggings, a dress made for someone half his size and a floral headband and ruins a Halloween party at the local gay bar.

At 10:58pm, probably while he was still at the Impulse Gay Social-Club, Chris helpfully offered a review, giving it four out of five stars:

On 1 October, Chris responds to a Facebook comment about Britney Spears on the website Women'sHealth, regarding an article headline in which Spears says, "I don't think you need a man in this world anymore."

This sparked a debate between two of Chris's friends on gender. William asked:

But of course, Chris is too stupid for protracted rational argument, and had to bow out:

On 16 October 2014, Chris reviewed the UVA LGBTQ Center, giving it five out of five stars.

Did he discuss his new piercing?

On 22 October 2014, Chris noted in his status that he was "Going to Queer Health: Thrive in the Center."