From CWCki
(Redirected from SEGA)
Jump to navigation Jump to search 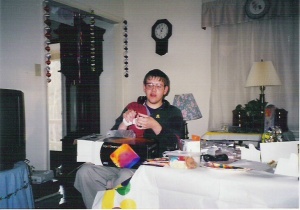 To say the least, Sega is an extremely important company to Chris, as without them, we wouldn't have seen Sonic the Hedgehog, and thus indirectly Sonichu.

Chris, at one point, owned every Sega console and add-on from the Genesis (or Mega Drive outside of North America) to the Dreamcast. His growing collection as a kid was significantly boosted in 1993, when he won the Sonic the Hedgehog Watch & Win Sweepstakes, adding $1,000 worth of Sega games and consoles to his collection. Chris remained loyal to Sega up to their exit from the console business in 2001, and still purchases games developed and/or published by them--even if he hates them.

Chris had cordial (albeit mostly one-sided) relations with Sega since the early years of his prospective Sonichu video game project, as can be seen in his early websites as well as video pitches for the project. Because Sonichu contains intellectual property from both Sega and Nintendo, Chris is faced with the challenge of making both companies see eye-to-eye, which he has approached with pitches targeting either Sega, Ninendo, or both at the same time, such as CWC Personal Sonichu Presentation. (To be fair, the two companies are no longer rivals, with many collaborations such as Mario and Sonic at the Olympic Games.)

In May 2016, Chris made another pitch to Sega, which (as of April 2020) the public has seen no signs of Sega having responded to. Around that time, Chris formed Sonichu Entertainment of America, which grew around Sonichu licensed merchandise. Images have been leaked of a Sonichu Advance game that is presumably in development by Ben Saint without Sega's involvement.[1][2][3]