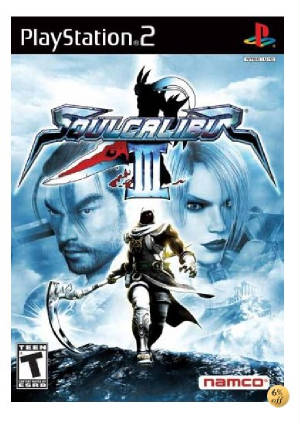 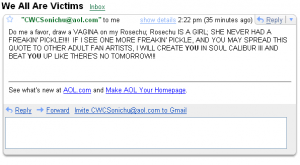 Transcending picklesauce and Ruckersville, a tale of ducks and chinas, eternally retold. 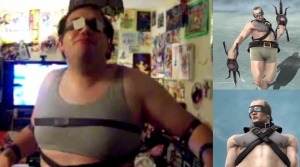 Soul Calibur (often written SoulCalibur or Soulcalibur) is a weapon-fighting game franchise created by Namco. While the series has a hardcore following, it's also famous for being easy to pick up – perhaps too easy, if Chris is of any indication.

The series and Chris

Chris's favorite character is Cassandra Alexandra,[1] possibly for no other reason besides the fact that he favors attractive female characters in all other games. Mimms also said that he used Cassandra in the UFS trading card game[2] and Megan encouraged him to stick with the "Greek girls" (Cassandra and Sophitia) in UFS[3].

In the infamous facerape scene of Episode 17 of Sonichu, Rosechu seems to duplicate Sophitia's B+G throw, called "Angel's Heaven" (Soul Edge) or "Holy Cracker" (Soulcalibur series proper). It could also be "Heaven to Hell," which can follow up this move. However, Sophitia's attacks had several advantages over Rosechu's attack. First, cracking the neck is generally faster and more lethal than clawing a head open and electrocuting the victim. Secondly, Sophitia cleverly performed this attack fully clothed, granting the series 16+ age ratings rather than Cannot Be Unseen ratings. Thirdly, Sophitia cleverly elected to not shout some of the most embarrassing battlecries in the history of feminism.

Chris loved to create his enemies in Soul Calibur III and make pathetic videos where he struggles to beat them on the lowest difficulty setting. He has threatened to do this to various people, including the fan artist Evan and anyone who dared draw a pickle on his female cartoon characters.

In the Christian Weston Chandler's Adult Chronicles ad, Chris promises CWC and Sonichu-related DLC for Soul Calibur IV. With the most advanced boob physics to date this series has seen, the public at large would probably rather not see that pack come to fruition. (Unless Mary Lee Walsh is included, naturally.)

Apparently he and Megan Schroeder were dedicated players of the arcade version, too, judging by e-mails discussing the purchasing of horribly overpriced weapon and ability cards to be used with the coin-op game.[4][5]

One aspect of Chris's Megan obsession included creating a character of Megan in the game, which reportedly gave her the creeps.

This video is notable for being the first known video Chris ever uploaded to YouTube.[7]