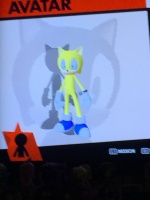 So close, yet so far.

On 7 November 2017, Sonic Forces was released for PlayStation 4, Xbox One, and Nintendo Switch. Despite being in the middle of the Financhu Crisis, Chris immediately ran out and purchased a copy for PS4, throwing down $39.99. He eventually also purchased copies for the Xbox and Switch[1].

There are three gameplay modes included. Classic is side-scrolling, reminiscent to the original Sega Genesis games. Modern is full-on three-dimensional, like many of the games released within recent years. The third gameplay mode is Avatar, wherein the player can create their own custom Sonic character to play as.

Naturally, Chris thought his dreams of having Sonichu in a bonafide Sonic game would come true, but was disappointed that they did not include Pikachu accessories to make a copyright nightmare.

In a show of his ego, Chris unlocked a heterochromia customization option, then took a photo and tweeted, "I wonder if that was inspired from me since my right eye Is green, while my left is a shade of blue, like purple: the combo of Blue and red."[2] Notably, Chris declined to recognize similarities between himself and possible parodies on Sonic Boom and My Little Pony, although he is happy to speculate that game developers had him in mind when including heterochromia as a design option.

IT'S DISAPPOINTING is a brief video of Chris attempting to customize a Sonic Forces character to look more like Sonichu. The video was recorded by Arthur Spatchcock via Share Play[3]

Four days later, Chris, still unsatisfied, asked his fanbase for someone to mod a more accurate Sonichu avatar for him.[4] Chris's disappointment with the limited custom options hasn't deterred him from wasting more money by buying copies for Xbox and Switch.

[Chris plays a level, only to fall to his character's death, then goes to the Avatar customization screen.]

[Shows his yellow Sonic character (Obviously meant to look like Sonichu) and rotates the model.]

[Puts a Shadow quill-style hat on the character.]

I can't change the color.

[Goes through other options to show how he can't make Sonichu, then exits back to main game.]

Someone actually decided to make a mod of Sonichu.