Heterochromia is a medical condition in which someone's irises are differently colored. There are two kinds: complete and partial. Partial heterochromia involves a color variation within a single iris (most common in people with hazel eyes). Chris has complete heterochromia, which means one of his eyes is a different color than the other. 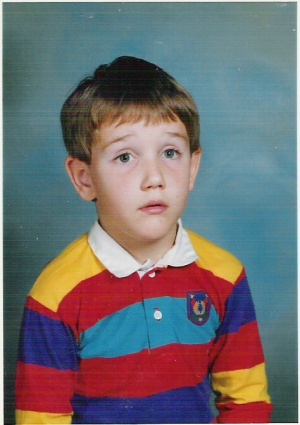 Chris claims that although his eyes were originally blue in high school,[1] he contracted pink eye (conjunctivitis) in his right eye, and the prescribed eye drops turned it green. His explanation cannot be true - while some medications can cause heterochromia as a side effect, the simple antibiotic or antihistamine eye drops prescribed for conjunctivitis cannot. It's more likely that his heterochromia was genetically inherited. In school pictures taken while Chris was very young, close examination reveals that his eyes are different colors. Nevertheless, the pink eye story is one of his favorites when introducing himself to girls. In 2021, Chris again claimed that "Young Christopher['s] eyes were Both Blue; no heterochromia Yet."[2]

It is also a prominent, hugely exaggerated feature of his comic self, with one eye colored emerald green and the other a sea blue. In reality, Chris's condition isn't particularly noticeable except upon close examination, and the less kind amongst us might presume that he only plays it up for want of any other endearing characteristics. According to eyewitnesses (like the above quoted), Chris's eyes are indeed differently colored, but to nothing like the degree Chris describes or draws. Slight heterochromia is in fact fairly common in people of northern European lineage, but Chris seems to think it is exceptionally rare and that he is more special for having it.

A close examination of Chris's eyes seems to indicate that Chris's "green" eye is actually more of a hazel/greenish shade of blue rather than a distinctly green eye that he portrays. It should also be noted that, despite the significance that Chris gives to this quirk, he often mistakenly colors his right eye blue and his left eye green in his comics. The reasons for these mistakes are speculated as stemming from his inability to visualize himself,[3] lack of attention while coloring, or inability to discern left from right. Perhaps Chris himself doesn't really notice the difference all that much.

Chris has incorporated his heterochromia into the bizarre dualism associated with his name change, asserting that Christopher "still lives in me, in my one blue eye."[4] Now that he's changed his name to Christine, it's anyone's guess where Christian now resides.

Instances where Chris has mentioned his heterochromia

"My left eye is blue, and my right eye is brown-my right is green."