From CWCki
(Redirected from Blanca)
Jump to navigation Jump to search

Blanca Weiss (a.k.a. Ami B-Chan, KawaiiKitsune123) was the identity assumed by various trolls who posed as Chris's sweetheart in order to get one thing: the Sonichu medallion.

The group pulling the strings was a trio of YouTube trolls. Two of them, going by the handles RickyRicardo123 and Nurse Icky-chan, talked to Chris via IM and telephone, respectively. The third, Ickeriss69, received a package containing the medallion (as well as an enclosed love letter) and uploaded a video of himself cutting it up and putting it in a pickle jar, before setting it on fire.

Some argue that aside from the medallion destruction, the team behind the "real" Blanca (as opposed to Lordsillynipples, who impersonated her after the original group had created the identity) did nothing except keep Chris to themselves, telling Chris to not make videos, stopping him from releasing content, etc.

Despite many people telling him Blanca was not real, and even after the medallion was destroyed on film, Chris still continued to believe she was real. He stated in the Christian Weston Chandler Interview that the people responsible for destroying the medallion simply lived near Blanca and intercepted the mail.

Since the destruction of the medallions, the three trolls have largely faded into obscurity.

The trio were good friends with several members of the Fried Chicken Trolling Crew, a now-defunct trolling group known for trolling various individuals and groups on YouTube. Some photos were shown to the FCTC, who later posted the images onto Encyclopedia Dramatica after posting the group's watermark onto them.

The group itself later fell out due to internal conflict. It was shortly revived as "Cool Troll Fighting Crew", but this group also later disbanded. As for Ickeriss69 himself, he went on to temporarily become an admin on /cwc/, but after more controversy this relationship broke off as well.

He still periodically attempts to revive (or kill) CWC trolling and, to this day, still has Chris's medallions, one of which he offered to the former ED owner GirlVinyl on the site's five-year anniversary. 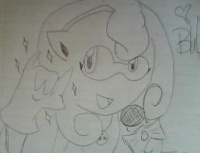 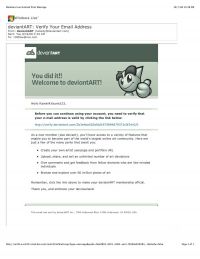 Chris's first interaction with Blaca would occur on 19 August 2008. Chris would receive an email from Blanca, where she shows him her OC Jiggliami, a cross between Jigglipuff and Amy Rose. Blanca would create a DeviantArt page that was partly dedicated to this character, and gave Chris a link to the profile in an e-mail.

Chris gets a clue

In April 2010, Chris published a page on the CWCipedia with a list of many of the women he had known in his life. Blanca was conspicuously absent from the list, but he did mention her briefly in the entry on Sarah Jackson. Of all the sweethearts he had met online, Blanca and Sydney were apparently the only ones that Chris had been able to successfully identify as trolls more or less on his own.

It should be noted, though, that while Chris might have figured out that Blanca was a troll, he still failed to realize she wasn't a real person. In December 2009 Chris uploaded a "correction" of his ED page; in it, he wrote that he had "[D]umped [Blanca's] sorry ass after that misdeed; I had trusted her."

Blanca can be pointed to as the first Trollsome Gal-Pal. The Persona put in place many of the memes that would serve as a template for future trolling: Coercion into leaking information, References that go over Chris's head, etc.

The many faces of Blanca