GiBi, or GiBi_Devon, is a YouTuber specializing in Chris-centric content since 2019. He uploaded videos summarizing Chris's weekly activity, while giving commentary, typically in the form of reading Chris's posts or Kiwi Farms posts, sometimes infamously with his own theorizing and speculation.

GiBi had permeated Naught and MKRNightVee's falsehoods about Praetor members wanting to get Chris to tase himself while reading their posts in a video.

In an attempt to create a daily mini-series providing his insights and speculations about Chris's incestuous affair with his mother, GiBi had gained notoriety for getting information from several conflicting sources. He took falsehoods, misleading statements, and fabricated evidence from Isabella Janke at face value, as well as claims from The WCT that she was conducting a psy-op, and claims from LavenderBonez, a self-proclaimed friend of The Suitress that she had deleted all of her social media accounts after the leaks. Following this, he had actively ignored and sneered at sources that had opposed his questionable findings and conclusions, such as Kiwi Farms users who were also looking into the build-up of the Incest scandal.

It was later found afterwards that GiBi had hosted a Discord server, the userbase of which partly consisting of minors, that had went mostly under-moderated, and allowed access to Jacob Sockness's own server.

GiBi had created his YouTube account, "GiBi_Devon" on 14 September 2015. Before posting any Chris-related videos, the channel primarily consisted of let's plays and reviews based around Star Wars movies, video games, and toys (mostly LEGO). His most viewed video at the time was his first video centered around Chris, in which he comments on his beliefs about the Dimensional Merge.[3]

One of GiBi's primary sources for his videos was this website, though he had also read posts made by users from the Kiwi Farms.

In November 2020, in The Place server, Naught claimed that GiBi had messaged him asking about Praetor and that he had given him information, which MKR stated was "cool", "since he's popular itll get the weens on the scene".[4]

In August 2021, while in the Halal Server, Naught claimed that "I used to feed gibi info during mine and mkrs feud with Dillin Thomas" and that "he didn't listen to me, i always gave him good info too".[5]

GiBi had uploaded a video on 20 April 2022 where he shares some screencaps of a conversation he had with The WCT, who was under the screen name "currentlyinexile".

GiBi discusses a screenshot of a text between Bella and the Suitress. The screenshot was uncensored in his video, leaving a phone number visible. 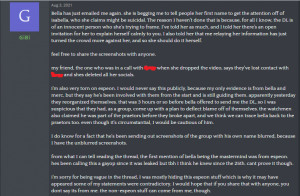 A DM which GiBi had sent to the Kiwi Farms user Spooky Bones.

In the wake of the incest scandal, GiBi attempted to create a daily series documenting the affair. This led to controversy surrounding his channel. One video in this series was made to document the potential perpetrators of the act. GiBi would attempt to research this subject by contacting various sources, many of which conflicted with one another. One of these sources was Bella, who had previously befriended the Suitress and gave him screenshots of text messages between her and the Suitress and between her and Chris. Another was a Discord user, LavenderBonez, both a former member of his Discord server, and another friend of the Suitress and of his.

Bella attempted to avoid getting doxed by putting the Suitress under her "Kelly Osborn" pseudonym. GiBi fell for this and was convinced that "Kelly" wasn't Bella. GiBi produced a video on the screenshots - claiming this was the case, but did not redact the phone number of the Suitress in them; he took the video down three hours later after facing criticism.[6] GiBi uploaded the video a second time, adding information that he received from the Kiwi Farms. He again included the Suitress' phone number but deleted that video after a few minutes.[7][8] GiBi made some changes, planning to upload another version,[9] but cancelled as new information had come out in the meantime.[10]

Following from the drama months later, GiBi took a short hiatus on Chris-related content and instead shifted his attention to news stories. GiBi later went back to documenting Chris's known activities from jail, such as his letters and art, and occasionally providing conversations he had with other orbiters, which was exclusive to his channel.

On 19 June 2022, Chris made a drawing while in Central Virginia Regional Jail and sent it to Praetor to sell on Etsy on his behalf. The drawing depicts CPU Blue Heart being interviewed on her opinion about "pride", to which she replies that "arrogance is the real sin". Along with Donald Trump and Vladimir Putin, Chris also cites GiBi as being at risk of committing the sin, and to be considered "neutral" on Chris's apparent scale of toxicity.

On 27 August 2022, Chris drew another drawing featuring GiBi, requesting Praetor to gift it to him.[11]