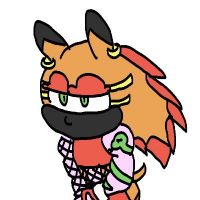 "You summoned us we came for cwc."

Eels and the Egg-man (@EelsandtheEgman) is a Twitter user who is internet friends with Helena Fiorenza and Kenneth Engelhardt. Because Eels lives in the United States and Helena does not, he has sent and received correspondence to/from Chris at Central Virginia Regional Jail on Helena's behalf, thereby saving Chris the inconvenience of sending mail internationally. Eels also posts the letters to Twitter, though he will sometimes choose to summarize the contents instead of releasing the full letters.[1]