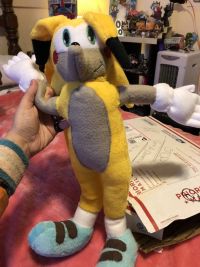 Chris's photo of the Sonichu plush.

ChuuChuuRocket, also known as Fumanchuchu and Churippu, is known for crafting custom plushes of Night Star and Sonichu for Chris as gifts which he received between July and October 2018. ChuuChuuRocket also optimistically believed she could befriend Chris.[2] While Chris expressed gratitude for both plushes, on the Sonichu plush he apparently committed a faux pas by simultaneously criticizing the ears and tail.[1] 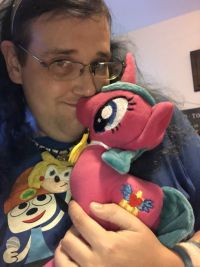 On 28 May 2018, Chris tweeted a request to his followers for someone to volunteer to create plushes of Night Star and Kun T’Nyuget.[3] ChuuChuuRocket decided to create the custom Night Star plush as a gift for him,[4] which took her about a week to make.[5] He received it on 2 July 2018 without incident. In response to the gift, Chris tweeted:

He also autographed the plush.

On 30 July 2018, ChuuChuuRocket commented to a friend how Chris's appreciation of the Night Star plush made her proud, noting he had taken the plush with him to BronyCon 2018. ChuuChuuRocket also explained that Guard Dog Null had asked her not to produce a plush of Kun T’Nyuget as it is a concept the Idea Guys had brainwashed into Chris and Null wished not to encourage it.[7]

On 31 July 2018, ChuuChuuRocket mentioned that Chris was gifting her some unspecified items in exchange, which Guard Dog The Captain confirmed.[8]

Chris's positive reception to the Night Star plush seemed to encourage ChuuChuuRocket in her plan to gift a custom Sonichu plush.

On 12 July 2018, ChuuChuuRocket announced that she planned to craft a custom Sonichu plush.[9] She posted in-progress photos to both the Kiwi Farms and Twitter.[10][11] At some point she decided to make two, thinking Chris could sell the other, though cancelled this idea after seeing toxic behavior and ultimately sending one.[12][13]

On 25 July 2018, Guard Dog Marvin tried to dissuade ChuuChuuRocket in a Discord conversation.[2]

On 18 October 2018, Chris received a completed Sonichu plush and photos were posted on his Twitter account CWCSonichu. While thanking ChuuChuuRocket over Twitter, CWCSonichu simultaneously criticized the plush, saying its ears and tail should have been stuffed.[1] ChuuChuuRocket tweeted, "Spoiler alert: I'm mad." CWCSonichu replied, "Why are you mad?"[15]

A fan spelled out the problem was Chris complaining, which ChuuChuuRocket agreed with. In response, CWCSonichu apologized, tweeting, "Oh, I’m sorry, but I do really like the Plush."[16]

Nine hours later, CWCSonichu tweeted an egregious beg claiming that his household would not be eating without donations, followed by another tweet on the Sonichu plush reading:

The tweet was quickly deleted, with no further mention of it by CWCSonichu.

The following day, CWCSonichu tweeted another apology for the original comment on the stuffing, writing "Damn! I Wish I could Edit This Tweet to remove the unwarranted criticism! Ugh. My head." CWCSonichu also wrote:

CWCSonichu also tweeted another apology towards ChuuChuuRocket for the criticism.[20]

In an 18 October 2018 tweet, ChuuChuuRocket explained why she had made the two Sonichu plushes - a gesture of sympathy to Chris for his treatment by the Idea Guys. She stated that she thought he could sell one to help raise some money due to being in financial straits from losing $6,000 to the Idea Guys' alleged extortion earlier in the year. She revised this plan after seeing toxic behavior by Chris.

In a Kiwi Farms post on the same day, ChuuChuuRocket commented that she decided to sell the second plush on eBay in order to recoup her cost for materials and time investment in the project.[21] The plush was purchased by The Sergeant at Arms.[22]

On 3 November 2018, she asked Chris for photos of Liza, Patches and Sylvia.[23] On 30 December 2018, she tried to discourage Chris from further contacting the troll Lukas.[24]

ChuuChuuRocket also reacted to news of Chris's Affair with Mother. On 31 July 2021, she tweeted, "What a way to burn out.. jesus christ.. this feels like it was inevitable and it should've happened sooner.. poor Barb.. poor Chris.. what awful lives they've lead.. I hope they're both safe and confined."[25] She also tweeted, "I went grocery shopping. I thought I was okay. Every old lady I looked at made me think of what chris did to Barb. I feel so sick."[26]