Lovely Weather is Chris' future wife, according to one of his predictions. During the events of Sonichu #10, Chris travels through the Time Void to meet and presumably have sex with her. Although many of Chris's real-life sweethearts have also made appearances in his comics, Lovely is (to our knowledge) an entirely fictional creation.

In September 2017, Chris remarked that he had fulfilled his comic's prediction by meeting his "Lovely Weather". This followed the revelation of his newest sweetheart, Jessica Quinn. With their breakup on 5 October, the future of the character is in question. 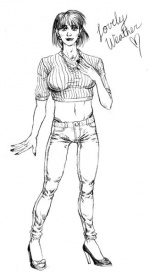 A sweetheart of the OPPOSITE GENDER.

Lovely Weather can be seen in the comic in her present-day form. Fans of Sonichu often say she bears a ressemblance to a man in drag or a hermaphrodite. Since Lovely Weather was a relatively new character in the Sonichu comic, with a first appearance in Sonichu #10, fans had expected more "shenanigans" involving her in the future. However, Sonichu #11 eventually concluded without her even appearing.

Lovely stands as a bold statement of Christian's unrealistic expectations, as she has enormous breasts, wears a thong, enjoys frequent casual sex, and thinks even the most bland sentence is hilarious. This depiction of Chris's ideal future wife directly contrasts everything he holds dear about females.[3] Through the comic, Lovely is portrayed as unintelligent, extremely promiscuous, and incredibly shallow.

Lovely and Chris were supposedly married by the year 2015. In his CWCipedia page devoted to her, Chris denies that Lovely Weather is The Wallflower as a pseudonym. 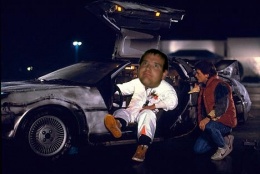 What he didn't mention is that he went back to 1955 and made out with his mother.

Chris tells his stories in a sporadic manner, so it is unlikely that he has put any serious thought into the mechanics of time travel, its effects on causality, the wisdom of living one's life out of order, the morality of manipulating the progress of other people's lives, and so on. The implications of meeting, let alone fornicating with his future wife are significant plot devices which have not yet been addressed.

For instance, in the comic book, Chris now has direct knowledge of his personal future that will affect the decisions he makes as he progresses towards it - in fact, he takes time to set their "fated first date" before attacking 4-cent. Knowing that he will eventually marry Lovely might, paradoxically, incline him to make decisions that result in events that will change the course of his life. There is the possibility that Chris's marriage with Lovely was preordained, and his time travel jaunt is one piece of the puzzle that leads to it. Also during the time he was sleeping with his supposed future wife, he was still in a relationship with Ivy in the comic's timeline. This means he cheated on her while she was written to remain 100% faithful and refuse to participate in a required Date-Ed class while Chris was stuck in the mirror dimension (yet somehow Ivy ended up receiving the highest grade in the class). This also means Chris found out he and Ivy would not last (possibly because again, he cheated on her, and news of the mayor no longer being a virgin would definitely spread through CWCville quickly).

Likewise, he has interfered with the future lives of both Lovely and himself. The future Chris may have been aware of his past-self's encounter with his wife, but he may also have some explaining to do if Lovely ever works out that he wasn't the one she happened to sleep with that time.

There's also the fact that having sex with someone under false pretenses is, if not outright rape, then something pretty unpleasant at the very least. Whatever it might say about Chris's understanding of causality, his encounter with Lovely speaks volumes about his understanding of sex and relationships. He's perfectly happy to screw first, then meet and get to know her later. It is also never brought up how she never noticed Chris was just the younger version of her husband.

Chris meets with Lovely Weather when he travels to the future. Although (according to Chris) he marries Lovely Weather in the future, when Chris meets her she believes that he is the Chris of his time and has sex with him. Chris at no point explains the situation or seems uncomfortable having sex with a person he's both never met and who believes he is someone else. In the mailbags, Chris explains that since she technically initiated the sex, despite being tricked about who it was, it both wasn't rape and was morally right and just.

In Sonichu #10, only pages after traveling to the future and raping Lovely Weather, Chris meets up with Meg Griffin of Family Guy. Chris asks her if Seth has permitted her to turn eighteen yet, but doesn't even wait for her to answer before making out with her (with more presumably happening off-screen).[4] Although Chris does not technically commit adultery, many fans of the franchise judge Chris's actions as lacking integrity.

She later reveals herself to be Silvana in disguise, which doesn't at all change the part of this that readers are latching on to. 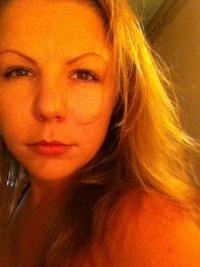 On 2 July 2015, Chris became friends with Jessica Quinn via Facebook.[6] Despite witnessing two years of very honest content, Jessica has remained respectful towards Chris – usually offering support and advice on improvement, which Chris seldom takes to heart. On 7 September 2017, following a month of significant events, Chris complained of his loneliness, to which Jessica replied with "We need to talk."

The following day, Chris updated his Facebook relationship status to "It's been complicated with Jessica Quinn" and uploaded a new video, proclaiming his love for Jessica. This was later followed by an artwork of Jessica, and a throwback to Sonichu #10. Though two years too late, Chris claimed that the aforementioned comic's prediction of meeting his future romance had been proven correct. He also stated that "Lovely Weather" was only a placeholder name until his sweetheart would emerge.[5]

On 16 September, Chris shared an updated drawing of Lovely Weather, with a greater resemblance to Jessica. Chris also stated that he would be using this design for any future use of the character in his comic.[7]

Jessica broke up with Chris on 5 October 2017. The fate of the new design for Lovely Weather, and of the character herself, is unclear.