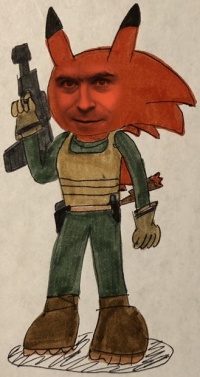 Theodore Robert Bundy (24 November 1946 – 24 January 1989), commonly known as Ted Bundy, was an American serial killer who raped and murdered at least 36 women. While many people view him as a sadistic sociopath, and with even Bundy describing himself as "the most cold-hearted son of a bitch you'll ever meet," not only does Chris believe that Bundy was innocent, but that he is actually the 67th of 69 Destined Sonichus and Rosechus, named Bundychu.

Originally implemented by the Idea Guys and canonized by Chris no later than January 2018, Ted Bundy is one of only three people in Dimension 1218 who were born half-Sonichu – the other two being Chris himself and his father, Bob. When the murders usually attributed to Bundy are brought into question, Chris maintains the belief that Bundy was in fact an undercover operative who was framed for the murders, remarking that "there was a whole bunch of mistake in there".[2]

Following Bundy's execution in 1989,[3] his soul was reincarnated in Dimension C-197 as a Sonichu; the aptly named Bundychu, with whom Chris has maintained a rapport with. Chris has gone on to reassure his fanbase that Bundy has not gone on any killing sprees.[1]

Despite their removal in April 2018, Chris continues to reiterate many of the Idea Guys' concepts, among which is Bundychu:

Chris' insistence on portraying Bundy as an innocent individual is rife. Given the card description, Chris believes that Bundy has assumed a chaotic good, freedom fighter-type role.[4] This is only further verified in his comic book appearance. 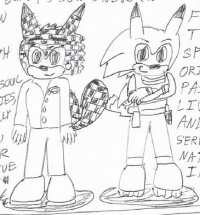 Ted Bundy appears as a minor character in the nonsensical Sonichu #13.

According to Chris's lore, when a Sonichu or Rosechu dies, they are reborn from an egg—as a Sonee or Rosey, respectively—in the exact same place where they hatched in their previous life, and with their memories intact.[5]

Before entering the portal to CWCville, human Bundy makes acquaintances with the recently returned Bob. In their dialogue, Bundy explains that before his encounter with the electric chair, he was pursuing Akan's forces with his allies. Consequently, he was framed by Akan and labelled as a serial killer. Upon entering CWCville, Chris explains through exposition that following their respective deaths, Bob and Ted were reborn in their Sonichu forms, who found purpose in defending CWCville.