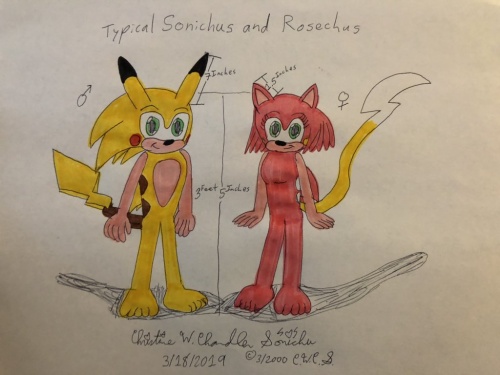 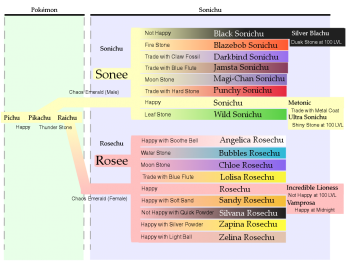 Evolution chart, based on Chris's statements about Sonichu evolution in a hypothetical Pokémon game. 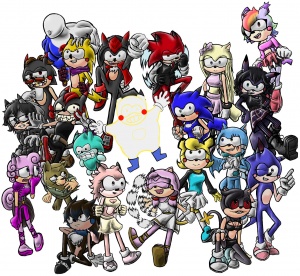 Various Sonichu OCs (and Pepsiman) in a group shot.

The Electric Hedgehog Pokémon are a group of Pokémon created independently by Chris outside the canon of its parent franchise. 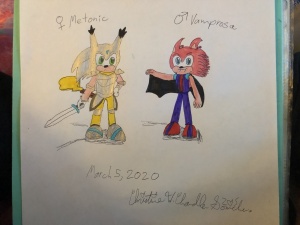 Until Sonichu 11, the sexual dimorphism in Electric Hedgehog Pokémon was consistent, with fans presuming that gender was the sole difference between the Rosechu and Sonichu "evolutionary" lines; with the exception of Silvana Rosechu, all Electric Hedgehog Pokémon fit neatly into these binary categories. However, after Chris's change in gender identity, both Robee Sonichu and Chris-chan Sonichu have also been rewritten as male-to-female transsexuals, yet both are still considered "Sonichus". Given how much Chris asserts that he is a TRUE and HONEST woman, it is strange that he does not change the names of his fictional characters to account for their change in gender, unless Chris means to depict Sonichus and Rosechus as two distinct (but interfertile) species whose members simply happen to all be (born with) the same gender.

Chris later explained that 1 in 13 Rosechus/Roseys is born male, and 1 in 13 Sonichus/Sonees is born female, and that it is also possible to have male Vamprosas and female Metonics.[1]

There is very little evidence to support the idea that Electric Hedgehogs actually are Pokémon. None of them rely on trainers, all have full powers of speech, and, as far as can be seen, they are essentially treated as humans in CWCville. As Sonees and Roseys, they hatch from eggs and "evolve" into their adult forms, but the similarities end there. Only two of them (Blazebob Sonichu and Chloe Rosechu) have ever been put into a Poké Ball (although Chris has alluded to placing Sonichu and Rosechu into S-Chu Balls)[2]. As individual species, Pokémon lack the vast varieties of powers and appearances that Sonichus and Rosechus have ; Pokémon can only know four moves at a time, whereas Sonichu and company appear to simply have whatever abilities would be convenient at any given moment. Even the Pokémon anime, which prefers to use the gameplay mechanics as a general rule instead of a physical law, has Pokémon knowing no more than four moves at once and does not portray Pokémon using moves that they cannot learn in-game (most of the time). However, like most of Chris's creations, Sonichus and Rosechus are essentially just Mary Sues, so the fact that they can rebel against established Pokémon rules is not altogether surprising.

It should also be noted that Chris will, unsurprisingly, ignore the logic of "Super Effective" unless it suits him. In the games, attacks will have their base power doubled or halved (or nullified altogether) if the opposing Pokémon is weak or resistant to the type of the attack used. This enables weak Pokémon to bring down opponents several levels higher than they; so long as they are weak to their attacks, they will go down faster. The anime prefers to ignore this rule and, if it is ever invoked, it is done to show how tough a particular Pokémon is. With Chris, though, it's just him being stupid.