DJ Jamsta is a Sonichu DJ, and a host on the KCWC radio station. His origins are unknown; Sonichu historians suspect he was plagiarized from a better comic. DJ Jamsta is known for using retro slang and making sexist remarks toward women. Even by Sonichu standards he is particularly ridiculous-looking. He looks kind of like if the beginning sequence to Saved by the Bell fucked Sonic the Hedgehog.

One of the most notable traits Jamsta possesses is an odd lack of consistency in coloring across his body. It's also not entirely clear if his ears are just a different color than the rest of his fur, or if he just has a spectacularly terrible hat, or if he is perhaps suffering from male-pattern baldness. Of note, if they are his ears, then his earphones rest on the side of his head, far away from anywhere they would be of any use. It is also notable that Jamsta has a fan-shaped tail not seen in any other Sonichus. It is colored in three bars that match his shirt, but no part of his actual body.

According to Chris, DJ Jamsta and Lolisa both have Normal typing, as they "lost their electric abilities long ago" but "make up for it in their musicality."[1] 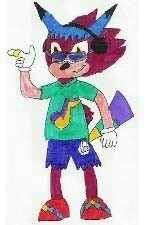 Jamsta is a symbol of what Chris thinks is cool, which is why he is so very uncool. He is pieced together from aged, tacky elements of the '90s that were perceived to be cool. Chris uses some of DJ Jamsta's lines in his future message. Like Chris trying to act "with it", Jamsta sounds much more like a marketing executive parroting lines for credibility than an actual "cool" character, throwing (what Chris considers to be) trendy words into his speech without much logic, a lot like the character Poochie from The Simpsons.

He also molested Punchy Sonichu, and that's no good.

At the behest of the Idea Guys, a story arc was introduced where Jamsta was put on trial for sexually assaulting Punchy. No explanation was given as to why Jamsta did this as at no point before had he been shown to be excessively lustful, violent, or attracted to men. Chris initially informed the public of this on Facebook in December 2017. Ironically, Chris announced this in the same post he revealed Brendan Fraser was the new mayor of CWCville, months before the real Fraser would reveal he was sexually assaulted himself.

Sonichu 13 goes into further detail about the events. At the trial, Jamsta was shown sweating profusely and terrified, the only time he's ever been shown as anything but a grinning "cool dude." Chris pulled strings and had Jamsta acquitted, the judge declared that everyone should learn to "forgive and live in peace." Shortly afterward, CWCville erupted in a full-scale riot. Chris speculated that this might have been because the people of his city might be homophobic. This riot was a major factor in the eventual fall of CWCville in the war against the Australatina national army.

Along with Lolisa Rosechu, DJ Jamsta Sonichu is somehow inexplicably older than the "original" Sonichu; his age is shown as 21 at the end of episode 17 in Sonichu #8, while, near the start of Episode 18 (which is set months after Episode 17 occurred), Sonichu becomes 20 years old. This leaves a logical inconsistency: If Jamsta is older than Sonichu, wouldn't he name the species of Pokémon to which he and the rest of the male Hedgehogs belong?

Chris addresses this in a Mailbag:

Of course, Chris's explanation only created more questions. In fact, it makes even less sense than before. For example, it doesn't explain where Lolisa and Jamsta came from in the first place, how they met each other, or why he is running a radio station. Also, the implication that they were hatched together is somewhat problematic and adds all manner of pseudo-incestuous undertones to their relationship. Of course, since all the characters seem to regard Chris as a father figure in some warped sense, that's pretty much parred for the course.