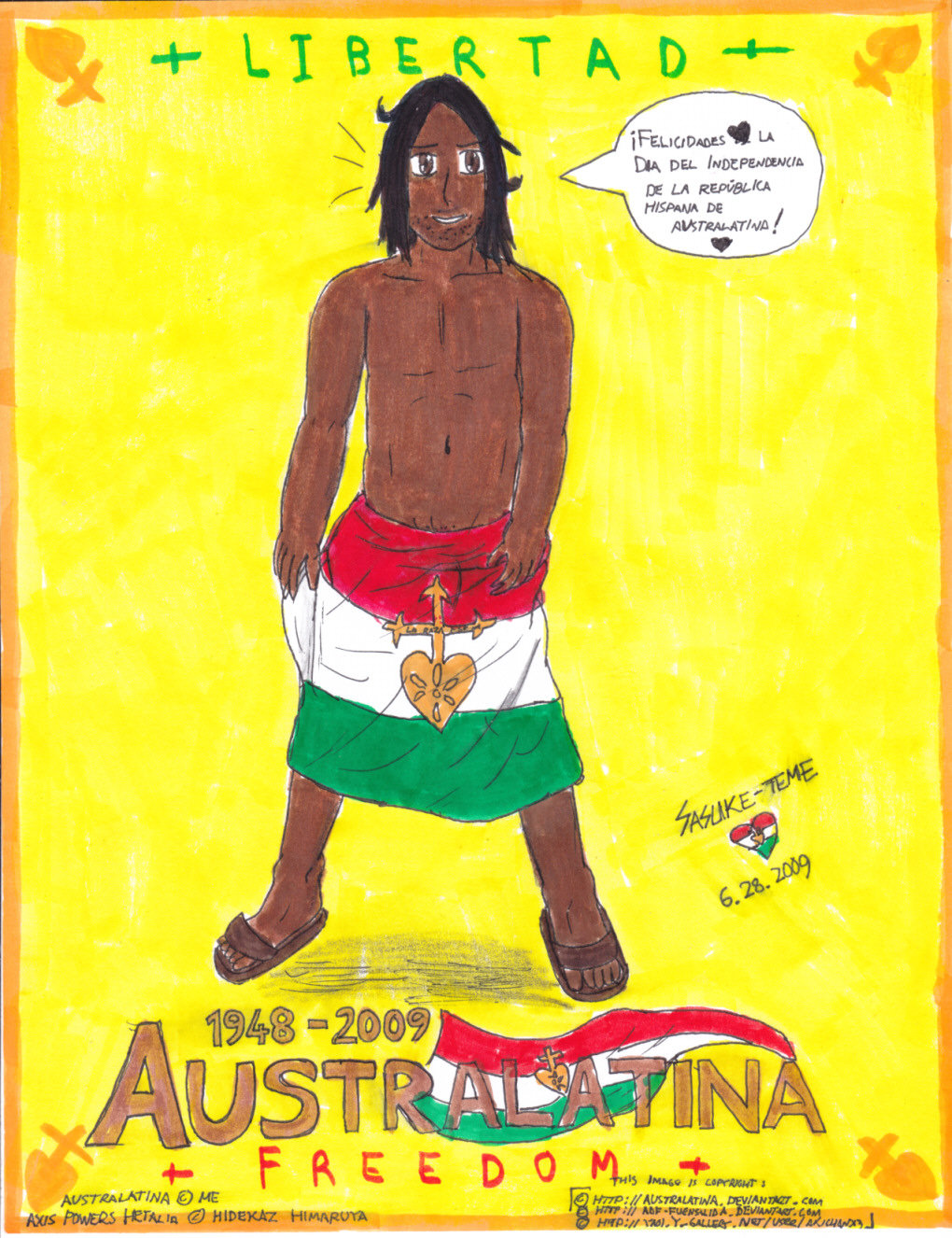 CWCville was nearly wiped out by a bunch of half-naked himbos.

Australatina is a fictional country originally created by Ahuviya Rotem Harel (Harel's moniker, "ADF", is an acronym for "Australatina Defense Force"). An Idea Guy had Chris include the country in Sonichu 13,[1] where it was added to Sonichu canon as a powerful micro-nation that comes into conflict with CWCville, which it's revealed to share a border with. This conflict was another attempt by trolls to ignite a feud between Chris and ADF.

The Australatinans are by far the most successful and threatening villains in Sonichu lore. While Mary Lee Walsh also invaded CWCville, she was only able to cause a brief ruckus that was suppressed in a single day. Australatina managed to decimate the entire city, imprison multiple important politicans and heroes and held control of half the city for an extended period of time until they were defeated by a deus ex machina.

The micro-nation comes into conflict with the neighboring city of CWCville after a member of the CWCville Defense Force defecates on the border. CWCville's defenses initially manage to keep the invading Australatinan forces from pushing into the city limits. However, when the trail of Jamsta Sonichu for the rape of Punchy ends in Jamsta's acquittal, the city was engulfed in massive, violent riots. This internal strife allowed Australatina to successfully attack CWCville, devastating it and destroying the underground tunnels below the city. This results in hundreds of buildings collapsing, and a large ravine forming in the center of the city that splits it in two, with Australatina taking over the west side.

The conflict continues. Australatina manages to slaughter the entirety of Cwcville's armed forces, and Chris is forced to bring in Pokemon and video game characters to bolster the defense effort. Later, an army of Nazis from an alternate timeline invade the prime timeline, and the Australatinas align themselves with them, turning the micro-nation into a vassal state for the Third Reich. However, when Chris corrupts the Nazi soldiers by turning them into Sonichus in a karmic transformation akin to the Tower of Babel, the Nazis dissolve into chaos and infighting, allow CWCville's survivors to defeat them. After the war is won, Chris and his hedgehogs go back in time to undo the damage they caused.

The ultimate fate of the country is unknown, though it was presumably destroyed, annexed by CWCville or even erased from history altogether following their defeat.

The version of Australatina that Chris and the Idea Guy cobbled together bears little resemblance to ADF's original creation. While Ahuviya's version is on an imaginary landmass east of the Atlantic coast and south of Newfoundland, the Idea Guy's version is apparently in Virginia (albeit a fictionalized version in an alternate dimension). While the citizens of ADF's version are Hispanic, speak Spanish, and are ruled by Maoist communists, Chris' version is apparently not only primarily white, but are also eager Nazi supporters. While the real-life Third Reich was known to align itself with non-white countries and even had their citizens as part of its military, there is no historical record of any of them actually adopting their ideology or carrying out any ethnic cleansing.

Like almost everything added in by the Idea Guys, the inclusion of Australatina just seems to be even more random, incomprehensible crap thrown in to appeal to their dumb interests and make fun of Chris, so the "facts" of the nation's worldbuilding and mythos were utterly irrelevant to them.