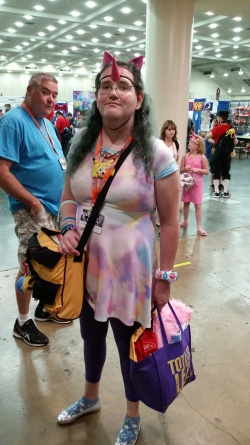 BronyCon 2017 was the ninth iteration of the annual convention for fans of My Little Pony. The 2017 convention ran from 11 August to 13 August 2017 at the Baltimore Convention Center in Baltimore, Maryland.

This was Chris' first BronyCon, and it would prove a major influence on the direction of his Sonichu comic – the notable outcome being his Pony fanfiction, Sonichu #12-9. The trip also marks a point in Chris's rejection of reality – during the convention, he believed his imaginary friend Magi-Chan was present with him, even dancing with thin air under the belief that Magi-Chan was his dance partner.

Chris drove all the way to Baltimore to visit the convention, staying for the full three days, spending the money he had taken from Patreon instead of on bills (causing a two-week delay in shipping his August books to patrons).[2] While he was there, Chris took many pictures with some of the show's staff, as well as other fans. He also made several new drawings over the course of the event; some of these were signed by voice actresses from the show.

Several fellow bronies from 4chan's /mlp/ board,[3] Twitter, and Kiwi Farms provided photos and reports on their sightings of Chris.

Unlike his last out-of-state trip five years before, he left Barb behind, however she did make him call her twice a day to check up on her.[4] One of his friends implied that she was helping Chris by promising to be on call for Barb if she needed help during the weekend.[5]

Overall, Chris's trip to BronyCon went abnormally well and seemingly without incident. He even described feeling "the MOST Love I have ever felt in my life" after returning home.

It is likely that BronyCon 2017 was the place where Bella first saw Chris, although she claims that she did not know who he was at the time and did not talk to him.[6] This would have been the only time she ever saw him in person.

Chris met Cathy Weseluck, a voice actress for MLP, talked to her about Sonichu and CWCville,[4] and got an autograph and a photo with her. He also met Clare Porter, a fan of his. Chris can be seen toting three large bags throughout the convention which apparently contained "the original copies of Sonichu",[4] snacks, and toys.

An /mlp/ user got Chris's autograph.

The same user provided an audio clip, apparently of Chris.

Another, less shitty shot of Chris at the Gala.

Another user reported playing against Chris at poker and accidentally misgendering him, and answered a few questions: 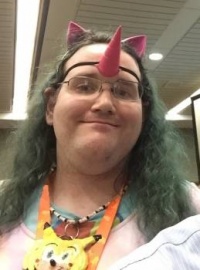 A fan complimented Chris on the Sonichu merch he had brought with him:

Chris appears in voice actor Claire Corlett's vlog for Day 2. Chris is seen briefly at 4:32 in the background, above the Brony wearing the rainbow wig.

Awkwardly attempting to socialize at the Gala

During the early morning hours, Chris was spotted walking away from a parking garage which had closed for the night, leaving him unable to access his car.[3] He took an Uber back to his hotel. Chris would later recap this event in a tweet the following year:

Chris spent his final day at BronyCon attending a panel, taking pictures with cosplayers and other fans, and no doubt buying more crap he doesn't need with his Patreon and tugboat money. He wore a multicolored poncho as a top, somehow managing to look even worse than he did for the previous two days. 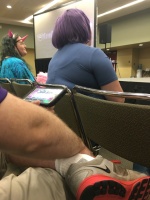 Day 3 pictures of Chris confirm that he wore the same ripped pair of leggings for three consecutive days. Based on his lack of basic hygiene habits, it can be assumed that they were not washed for the entire weekend.

After the con, Chris drove back to Virginia, car-pooling with Magi-Chan.[9]

Chris was recorded asking a difficult-to-understand question about ad-libbing at the aforementioned panel, but not before greeting them in a jarringly high-pitched voice. He later shared the video on Facebook, with the caption "So cute! :)".

Chris: [creepy laugh] Ohhhh. But in the ad-libbing talk, ya'll did answer one of my questions, starting with: Y'know, "I like kites," from that episode of My Little Pony.[10] I did see ad-lib and [unintelligible] so [mumbles]. Um, what ideal ad-lib would you like to contribute eventually in any show, including My Little Pony, and uh, which ones have you done so far are your personal favorite? Not counting "I like kites". [laughs]

Panel: Is that a question for all of us?

The panel's response to Chris is as below:

Panel: Is that a question for all of us?

Ad libs? Well, the whole thing with ad libs is it's kind of hard to pre-plan an ad lib because that's the nature of it, is to just kind of make it up on the spot. Kind of as you're saying the lines. So, uh, I mean I guess I'd want to say one that was popular, maybe. I feel like an ad lib for Tho- I don't know if there's Thorax ad libs, but for Vinny I had a lot of ad libs in Littlest Pet Shops, uh, he did [character voice] "Uhhhhh, I don't know!" He had lots of weird ad libs.

Normally, we don't get- We're not allowed to ad lib. Whatever is written, uh, in the script is pretty much what we have to say, so, unless you're coughing or laughing or [unintelligible], it stays. It's really standard not to do that. But if I were to pick something I would say, I would love to ad lib more Spike in his sleep. Sleep talking.

After the around three-hour drive back to 14 Branchland Court, Chris shared images on Facebook, showing pieces of merchandise he purchased along with some new drawings he made. Some of these were autographed by other visitors to the convention, notably several MLP voice actresses:

Chris described his enjoyment of the event:

Although not without some muscle soreness from hauling his Sonichu crap, souvenirs and fat gut everywhere.

Chris would go on to attend the following BronyCon.