The Charlottesville branch of Target, January 2010.

Another view of the same store as it appeared in April 2015.

On 20 July 2005, Chris felt it'd be a great idea to head down to his local Target mall store and continue his Love Quest. After being told to leave because he was loitering and disturbing customers, Chris fought back and was eventually restrained, handcuffed at his wrists and ankles, and even worse, cuffed to a wheelchair like a slow-in-the-mind. Chris was charged with trespassing and disorderly conduct in the aftermath of the incident, though the state ultimately decided against taking the case to trial.[1][2]

In Chris's own words

Chris described the incident in an entry to CWC's Diary.

The incident distressed Chris so greatly that he adapted it into Sub-Episodes 7 and 8 of Sonichu #4, entitled "Off-Target." "Cleverly" renaming Target as "the Get-Tar Region" (which causes many newstarters to the series to think Chris is talking about the guitar retail chain Guitar Center), the story seems surprisingly faithful to what really happened that day, at least until the sword-fight and the part where his imaginary twin sister saves him from a Transformer.

What's interesting to note about the story is how Chris betrays himself in his attempt to whitewash the story to make himself the hero. At the beginning of "Off-Target," he all but admits that he plans to use the new locale to sit around all day, using The Oversized Drinking Straw of Fail to fill the singularity inside his gut with its soda, drawing his shit comics, and waiting for tee-totaling Aryan supermodels to show up and bear his children.

So by Chris's own admission, his intention was to pay the good people at Target a dollar a day to let him sit in their store and bother female customers until he got laid or died, whichever came first. Strangely, the management wasn't really thrilled with this arrangement, and as the comic shows, Chris clearly can't understand why loitering on private property is bad.

Instead of focusing on the Manajerks'/Jerkops' motivations, Chris simply infers that they despise him for being a virgin with rage, and places the most attention on the indignity he suffered from his arrest. Hence, the comic shows Chris being tackled (albeit by a giant robot), "hog-timed" (complete with apple, as if he were about to be rotisseried), and hauled off for trial (by Mary Lee Walsh, in a scene ripped off from The Transformers: The Movie).

In another example of how selfish Chris really is, he writes his own mother out of the story, and has Crystal rescue him instead. That's gratitude for you.

The correspondence with Jackie revealed that in the ensuing trial, Chris thought that his work with the Pokémon TCG League let him off the hook. In reality, the charges were likely dropped due to insufficient evidence, and/or the state just not considering the case to be worth pursuing, due to the comparatively minor nature of the charges and Chris being a first-time offender who could fall back on the autism card. Chris probably mentioned the volunteer work because he believed a person's merits, no matter how unrelated, would automatically make one innocent of all charges. It is also telling that he recounted the charge as "Soliciting", whereas the actual charges were "Disorderly Conduct" and "Trespassing"; he feels that he was only persecuted because of his Love Quest efforts, and not because he was tard raging.

Chris evidently started shopping at Target again an indeterminate amount of time after the incident, either through the store employees agreeing to drop the ban, or just forgetting about it.

In August 2009, Chris was goaded by Kacey to consider applying for jobs around his area, and settled on Target as his choice. Chris initially stated he received an e-mail rejecting his application, allegedly because "they got enough people as it is right now."[3] However, things seemed to work out the next month, as he managed to snag a job interview at the store. Following that, Chris failed to get a hold of his interviewer and allegedly received another rejection e-mail,[4] eventually conceding that he wasn't hired. This would be the final time that Chris ever attempted applying for a job. It's unknown if this was the result of the management not wanting to hire him based off the previous incidents (if this was the same location), a particularly poor showing at the interview, or knowing Chris, some combination of the two.

Chris visited Target on 16 November 2014, as part of his Sonic Boom Protests, where he apparently planned to vandalize any Sonic Boom-related stock that they had. However, he found out that they kept copies of the games in a locked case and, clearly forgetting any lessons learned nine years prior, settled for raging at a couple of employees over the store's decision to stock the games. 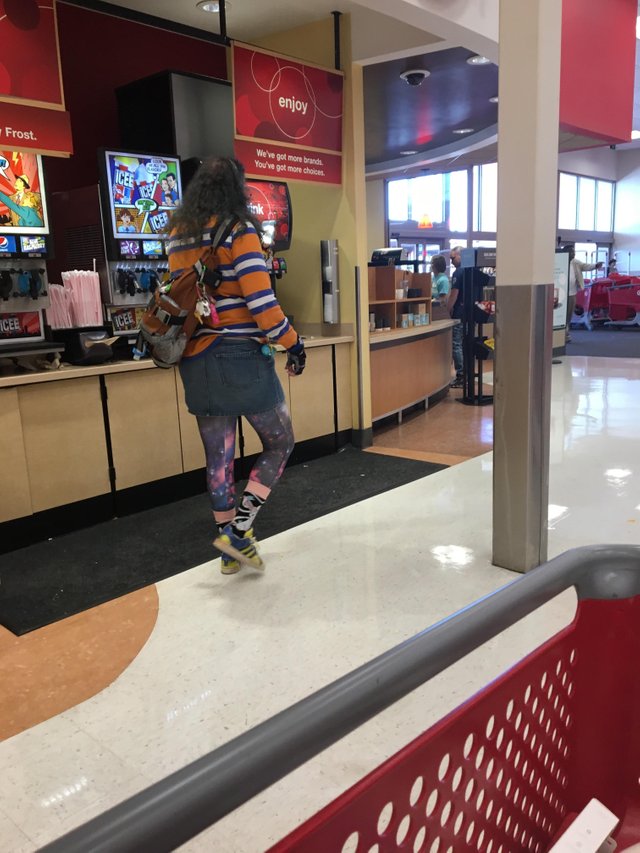 Photographed by an employee during April 2019.

Chris was photographed at a Newport News Target in April 2019 by a fan.[5] The photo shows a prominent bald spot on the back of Chris's head. His mental state also seemed to be in decline based on the fan's account: