Magi-Chan is a Sonichu and a member of the Chaotic Combo. Like Chris's other lazy recolors, his name is a lame pun: according to Chris, his name is intended to play on the word "magician".[3] He's the serious know-it-all and the only character not solely motivated by finding a sweetheart. He's also one of the major sources of deus ex machina, and thus far the character most often depicted as just a floating head providing walls of expository dialogue. He is purple, but has been depicted as crimson. His design combines the standard Sonichu template with Mewtwo, who is incidentally Magi-chan's husband and father. He is was probably the only sympathetic character in the whole series, due to his sarcastic and often serious mood unintentionally making him seem intolerant of Sonichu and Chris's stupid antics, as well as his character's unintentional homosexual undertones.

Since mid-2017, Chris has thought of Magi-Chan as an imaginary friend hanging out with him in the real world, eclipsing even the original Sonichu in popularity. The Idea Guys, injecting themselves into Chris's life about this time, seized the chance to run with this as far as they could. New facts about Magi-chan, including his incestuous homosexual marriage, were introduced to Chris in this way through early 2018. In March of that year, a psychologically distorted Chris declared that Magi-chan was his husband, as well as Mewtwo's. After the Idea Guys were removed from power, Magi-Chan has become a key player in the Dimensional Merge and one of Chris's Twitter sockpuppets, usurping Night Star.

Around 2017, Chris began to show a greater interest in Magi-Chan, more so even than Sonichu. In Dancing with Magi-Chan, Chris dances a duet at the August 2017 BronyCon with Magi-Chan as his dance partner. In January 2018 Chris revealed that Magi-Chan is now married to Mewtwo, his master -- and later that year, went on to clarify that he was also married to Chris. In the June 2019 Believe in the OCs and Deities!, Chris claims that Magi-Chan is sitting next to him while gesturing at thin air. Furthermore, in August 2019, Chris, while using a sockpuppet account of Magi-Chan, proclaimed that Magi-Chan had fully manifested into reality[4]. In First recorded statement of Magi-Chan Sonichu - August 15, 2019, Chris claimed to be possessed by Magi-Chan, changing his tone of voice, demeanor and wordage in an attempt to differentiate the two. Chris clarified that Magi-Chan and himself had allegedly switched bodies, and that Chris was now in C-197, then tried (and failed) to move an object with psychic powers. The Magi-Chan charade continued for almost exactly one month, when Magi-Chan announced that Chris had returned, but maintained that he still remained in our world. [5] Despite allegedly no longer occupying Chris' body, Magi-Chan continued to post on Twitter, including making the claim that he will visit Null, owner of the Kiwi Farms sometime a few days after 18 September[6]. On 25 August, Chris, role-playing as Magi-Chan, attempted to contact Null, but ragequit after Null refused to entertain his delusions:

Since the Idea Guys, Magi-Chan has become a popular target for those trying to influence Chris's beliefs. 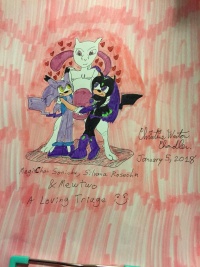 However, Magi-Chan later came in handy as a sort of "right-hand man" to Chris, particularly in his fight against homosexuality. Chris has stated that Magi-Chan monitors all sexual activity in the city using his psychic powers, and later has Magi-Chan travel to the future in order to obtain a bulk batch of the cure for homosexuality - Chris's blood. Magi-Chan would effectively contaminate the water supply of CWCville with Chris's blood in order to cleanse the world of homos. Magi-Chan would later come out as gay himself, when he married Mewtwo[10].

During his phase of being possessed by Magi-Chan, Chris speaks as the character in First recorded statement of Magi-Chan Sonichu - August 15, 2019.

Chris recorded lines for Magi-Chan for the Sonic World fan game, hoping for a mod of the character.