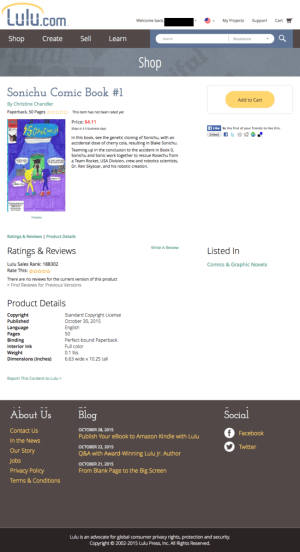 The Lulu listing for Sonichu 1, as seen in November 2015

Lulu is a website which offers self-publishing for authors. Customers can also order books directly from the site.

In September 2015, Chris began selling printed copies of the Sonichu comic on Lulu.com,[2] as well as offering autographed versions through Etsy (by ordering the comics from Lulu, signing them, then shipping to the buyers).

After a two-year hiatus, he announced on Patreon in 2017 that he would be shipping out Sonichu books again. It was discovered that he was still using Lulu.

A few weeks after selling directly through the website in 2015, he changed the Lulu listings to private. He then edited the book listings on Etsy with the following:

When asked, Chris stated that he had to do it that way because of the haters.[3]

In 2017, Chris revamped his Patreon reward tiers. He included options for fans to purchase autographed books. At the $20 per month level, one could buy a "Book of the Month" subscription; for $50 per month, a set of four books.

In December 2015, Chris was banned from Lulu for selling fan fiction.[4] In true Chris fashion, he responded by threatening Lulu's executives with physical violence,[5] despite the fact that he was on probation for an act of violence against a GameStop employee.

He elaborated further on his threat, saying to a Kiwi Farms user:

Chris's anger against Lulu is reminiscent of his grudge against Mary Lee Walsh. Both were figures of authority who told Chris the cold truth about him being wrong on some of his most beloved notions and refused to budge. More than a decade separates the two, yet Chris has learned nothing on conflict resolution since then.

The fact that Chris was able to continue supplying comics from Lulu implies that he simply rejoined the site under an alternate account.

Throughout 2016, facing mounting criticism for being unwilling to work on the comic that he had been paid over $1,000 to do, Chris continually used Lulu as a scapegoat, casting blame on the ban to explain why he had no work ethic.

In February, he said the following in response to a troll who contrasted his desire for a fan to send him a PS4 with his failure to work on the comic:[8]

In December, after a full year had passed since the ban, Chris was still holding his grudge:[9]

It is illogical for Chris to place the blame for his loss of creativity squarely on an event which happened in December 2015.

Chris actually stopped work on the comic on October 25th, long before Lulu banned him in early December.

As stated above, he had solved the publisher problem by 7 January 2016, when he posted, "I am capable again of selling and printing my books." He also had motivation enough to release Books 3 and 4, in January and February.

In addition, Chris mentioned to Arthur Spatchcock in February 2016 that he had some ideas for new Sonichu pages.

Chris might simply have a case of writer's block. In November 2016, he said, "And since last December with that mess with Lulu, I feel the feeling has to be fresh and staying hot. I have been unable to find that feeling again."[10]

The excuse continued into 2017, when he reacted angrily at a ween who had brought up DStecks.[11]

However, just one month later, Chris began drawing Sonichu #11 again. He later mentioned on Patreon that he was planning to sell books again, and it was confirmed by a field agent that he intended to use his alternate Lulu account to do so,[12] proving that his lame attempt to blame Lulu for killing his creativity has no merit. 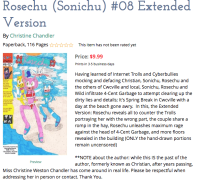 The "extended" edition of Sonichu 8, behind an age verification paywall.

On 9 February 2018, Chris, for whatever reason, thought it would be a good idea to open the second Lulu account to the public.[13] Predictably, weens and A-logs flagged it again, and three days later, it was gone.

However, in the next few days, Chris made another announcement, putting up a poll on whether his fans would like a copy of Bryanfrogboy's CWC Prequel comic with their comic order in March.

This suggests that he simply made another Lulu account, handily defeating the weens at their game.

In April 2020, Chris increased book prices to a minimum of $15 per issue, due to a rise in Lulu's prices due to "their greedy mits and “Better Quality Ink” or some shit like that."[15]