Amiibo are figurines which, when brought in physical contact with a Nintendo Switch Joy-Con, Wii U GamePad, and 3DS system, will add features or functions to a game. On 6 April 2015, Chris unveiled his own custom Sonichu Amiibo for sale on eBay. He offered 10 for sale for $41 each. They sold out within 2 hours. Another batch of ten appeared on eBay on 3 June 2015 and also sold out within a few days. His attempt the following month to sell a medallion with an Amiibo as a bundle deal did not work out so well, however. Undeterred, he introduced a Blake Amiibo in August. When he moved to Etsy in September, the floodgates opened, as collecting and customizing Amiibo developed into his new favorite hobby. Naturally, Chris is unaware that by customising and selling Amiibo he is violating copyright.

The information and photos uploaded to his eBay page revealed that to create his custom Amiibo, he had bought a Sonic the Hedgehog Amiibo, broke the limbs, repositioned them, glued them back on, and repainted them.

Chris also noted, "The figures were mint in package, but then physically remolded, repositioned and strengthened, then put into new packaging, as shown in the photos."

Please note that these Amiibo figures cost $30 more than the official ones.

It's worth noting that to produce each Sonichu Amiibo, Chris had to buy a Sonic Amiibo to repaint. In addition, rather than simply sculpting Sonichu's tail himself, he opted to cut the tails off of existing Pikachu Amiibo to glue them on. The end result is that each Sonichu Amiibo uses both a Sonic and a Pikachu, doubling the cost of materials to $26 a pop. Between the base Amiibo, CRAYOLA FUCKIN' MODEL MAGIC, acrylic paint, eBay fees, shipping costs, and time and labor invested, it's not unreasonable to assume that Chris is making a minuscule profit, if any. This seems consistent with his general financial history.

He kept the pile of leftover Pikachu bodies, unsure of what to do with them, until someone suggested that he use those parts to make Sonee and Rosey figures[1].

The Blake Amiibo have even higher production costs, because Blake uses a Bowser Amiibo chip rather than the Sonic or Pikachu chips that would normally be built into the figure. Christian at least seems to be aware that using three Amiibo to construct one might be a bad idea, but production continued nonetheless. 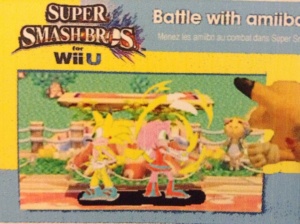 On the same day, Chris posted an announcement on Facebook with a link to his eBay page. He uploaded a new photograph of himself which implied that Rosechu Amiibo were on the way. He also put up a new, relevant Facebook cover photo. 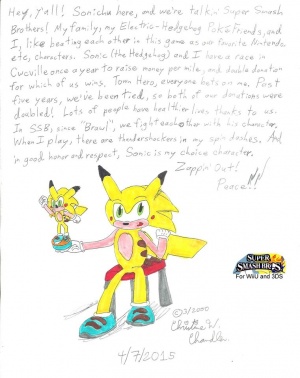 The following day he clarified:

Simultaneously, Chris tied his new Amiibo with a desire to make Sonichu a downloadable character for the game Super Smash Bros, including a drawing of Sonichu holding his own Amiibo.

Upon announcing his second Amiibo listing in June 2015, he let his fans know that he had suffered for his art:

In July, in response to the tepid response to his Amiibo/medallion bundle sets, Chris made a wide-ranging appeal, focusing not on the Amiibo as a product but on the character of Sonichu himself. He also reminded everyone that just as he had pulled weeds, he was putting a superhuman amount of effort into these figurines: 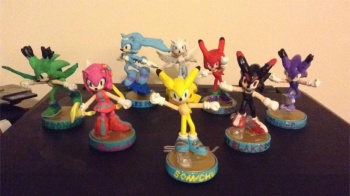 Even this plea couldn't move product, unfortunately, and he was forced to lower the price.

Over the months, Chris made more Amiibo based on his comic characters. At first he doubted that he would be able to bring them to market. As he explained on Facebook:[2]

He also whined about "the return of the blue arm bandits behind these Sonic Booms occupying our minds and stressing me."[3]

Nevertheless, he overcame these obstacles, and in August announced on Facebook that he was offering ten Blake Amiibo for sale. Because of higher production costs, he jacked up the price to $50.

For the Blake Amiibo product description on eBay, he simply made superficial edits to the Sonichu Amiibo description. Half-assing it as usual, he neglected to delete references to Sonichu, and he STILL referred to himself as "Christian," demonstrating how seriously he takes his female identity.

Three days after the offer, since he had sold exactly zero, Chris threw in an autographed photo and edited the description to read:

Despite his best efforts, after three listings he only managed to sell five of the Blakes.

In early September 2015, Chris shifted from eBay to Etsy to sell his items. Shortly thereafter, throwing caution to the wind, he listed eleven Amiibo, including Sonichu, Blake, the entire Chaotic Combo, and three "CWC Amiibo Figures"--traditional Comic Chris, "Post 2011 Christine Weston Chandler," and Chris Chan Sonichu. The new website required new product descriptions; for the most part he copied the descriptions from eBay, but added a precis of each character.

In mid-October, right before his conviction, he added:

In mid-October he added:

On 25 September, two more Amiibo appeared on Etsy, part of the "Second Wave." Even though Chris hadn't yet created any and said that it would take four weeks to make them, he nevertheless copy-pasted the section from the other entries stating, "These Figures have been personally assembled within the past month, and all are ready for quick shipment." He also referred to photos which didn't exist. 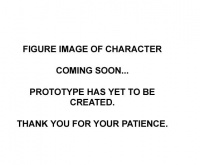 Chris used this as a placeholder before he had photos of the Slaweel and Graduon Amiibo.

In mid-October, he felt compelled to add:

This Amiibo disappeared from Etsy around 26 October. When a fan asked about it, Chris replied:[4]

Sure enough, on 11 November, Chris triumphantly announced on Facebook:

In mid-October he completed the prototype, made the relevant changes to the above text, and added:

In early November Chris threw together a set of "Me, Myself, and I."

While Chris has not yet received negative feedback on eBay or Etsy for these items (in part because of the threat that crossing the Great Director Chandler can result in public doxxing), the quality of those received has been less than spectacular. On one of them, the tail and right ear had come off in transit, despite Chris's order to the U.S. Mail, "THIS SIDE UP." The "Certificate of Authenticity" read:

Another Amiibo arrived essentially broken in half: 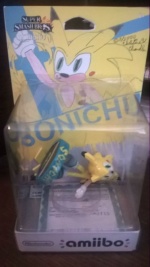 The recipient stated, "the head is off, the tail is off, and one of the ears came off where he had just wrapped the modeling clay around sonic's existing ear. no glue or anything." He also noted that Chris had attempted to reseal the package with double-sided tape, which had collected dust and grime.[5]

While he said it was "worth every single cent," he noted that both the ears and the tail were broken off.[6]

A user on Reddit posted images of another received Amiibo with a broken tail. It arrived with instructions on how to take care of the "medallion."

Someone with a Tumblr account posted pictures of her received Amiibo. They indicate that Chris is actually editing the small print on the package to insert his own copyright notice.

And another. Notice how Chris asks, "Please Leave Positive Feedback."

As posted on Instagram, received Sonichu and Blake Amiibo: 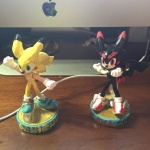 An Australian recipient took the time to make an in-depth snarky review highlighting the shit condition of the item:

A purchaser of the Amiibo/medallion package set posted an unboxing video: