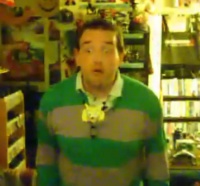 Chris actually derps out from rage.

"CHRIS!!! CHANDLER!!!" is a video released on 6 August 2009, during the SingStar Challenge saga. In this video, Solid Chris exposes his rage against Liquid Chris, accusing him of not doing the last song right and ordering him to redo the song and put his commentary in another video. This video is notorious for the anger and angst shown by Solid, who deleted the video shortly after uploading it. Prior to the sudden termination of TheCWCvilleLibrary in December 2015, it was the second of Solid's most-viewed videos, earning over 300,000 views prior to the channel being taken down.

And commentary? You can put them in a SEPARATE video. SEPARATE. So, SING the whole 9-minute-something song.

AND anurr' thing...CHRIS. Your for real n--your real name, as I have been told by Kacey...is only Chris Chandler! No "-tian," no "-topher," just Chris! So, admit that! An' anurr' thing...: [yelled while jumping up and down like a child]

[gasps for air in an annoyed manner] I am CHRISTIAN...WESTON...CHANDLER! SO GET IT THROUGH YOUR DAMN FUCKING SKULL

AND CALL ME THE REAL NAME THAT have God has been given to me,

AND the bear at Regency Square Shopping center, during 1989...

Christian Weston Chandler, YOU are only

Your medal is made out of

The whole length of time, THE REAL medal HAS been made out of Crayola FUCKIN' Model MAGIC, and acrylic

[pauses, realizing what he said has no relevance to the topic at hand] Redo the 10-minute song and save the commentaries for a [lowers his voice to an angry whisper] separate video, [stops whispering] and everybody on the internet knows that I am the real deal, you are the impostor, so give up the damn game already before I really call the poli--[realizes he fucked up] before that I actually--[fucks up again] before I tell the police all the information I have gotten since I finally got them involved, and then send them on your case, put you in jail bef--, even though I would prefer not to see you in jail because Kacey respects you so much, man! [in a really high voice] She cares about you so much! She has told me so herself, over the telephone!

If I did not have that [voice is normal again] beforehand, I would have just been gladly prepared, gladly, and only gladly, before talking to her, gladly, to see your ass behind bars. But after talking to Kacey, and hearing her honest respect, [calms down here] I would hate to see you in jail, out of respect, and of care, because she would be heartbroken. You are a lucky son of a gun, Chris Chandler, so quit this stupid impersonation game. Call me by the real name that God and the bear has given me throughout my whole life. [Starts to rage again] The current full name of Christian Weston Chandler, my first name being Christopher and my Spanish nickname being Ricardo. But in the end, just call me the full name, Christian Weston Chandler.

[Takes a few deep breaths, possibly due to exhaustion]

This game is not fun. If you are not careful, you really are going to go to jail. You will be tried in court, and you will be going to jail or serve community service, forcedly. I have--I was nice about it, I told you the details, and what do you do,

YOU KICK ME IN THE BALLS AGAIN!

And I do not appreciate that! So STOP it! Stop it!

Come clean! Rip off your PAPER medallion, RIP IT OFF like a shred of paper, look at my medal, I cannot even twist it, because it is made from Model Magic, not some cheap paper I can get at Wal-Mart for 500 dollar--for $5 for 500 sheets.