From CWCki
(Redirected from Vivian)
Jump to navigation Jump to search

Vivian Gee is the creator of the Sonichu audiobooks and other Chris-related videos and cousin to Clyde Cash.

She is also the owner of Hamsty the Hamster, a video-posting plush hamster that has already managed to kill itself several times over Chris's wonderful effects on the psyche. On 30 May 2010 Hamsty was decleared the owner of CWCipedia. 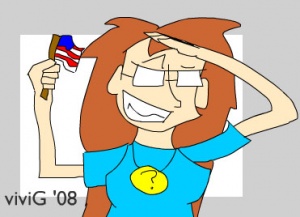 If you think this was Vivian, THINK AGAIN!

Vivian, ironically, was probably one Chris's few serious Internet "friends". While that might be taking it a little far, she's tried to genuinely help him. However, despite all the warnings of imminent doom, Chris ignored her regularly, and proceeded to fail spectacularly. Vivian has apparently toned down the white knight antics, and has realized Chris is an idiot who cannot improve. Several e-mails have been recovered so far. Most are simply Vivian saying "JESUS, STOP BEING A FUCKTARD!!" and real advice. Chris wasn't interested until it involved his Internet gal-pals or Sonichu. She once talked to Chris for three hours to convince him to get help, with no success; in her words, talking some damn sense into Chris is "like fighting a wall".

Some time later, Vivian gave Chris a copy of a novel she had written. Chris, however, most likely did not read it, as he mentioned that the cover "was nice" and was worried he was being charged for it. Had he actually sat down and read it, however, he would have probably seen some incredible similarities between the characters and settings of that story and his own world.

In September 2009, a Captain's Log video was addressed specifically to Vivian, with Chris demanding that she close her YouTube account AND delete all the videos, "if she wants to earn back his trust" after she and Clyde Cash, her cousin, had done "so much bad against him." It was soon followed by a violent death-threat video by Chris against Vivian, threatening to brutally dismember her and all of her family members, in which he expressed his hope that it would make her understand "the fury of his wrath".

In a Captain's Log written on the CWCipedia on 14 March 2010, Vivian G.'s page is one of many listed in Chris's collection of those that are demanded to be altered after the discovery of The Wallflower's page, completely and utterly unaware of Vivian's true nature.[3]

As of May 2012, Vivian has apparently gone the way of Liquid Chris and shut down her YouTube account. Her DeviantArt page remains online but has been inactive since 2009. 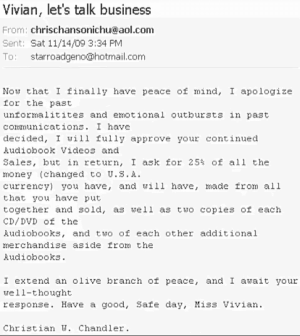 After weeks of tension, the relationship between Chris and Vivian started to relax a little, and on 14 November 2009 Chris extended an olive branch of peace. He excused himself for his lamentable attitude and decided to approve the audiobooks, in return for a cut of the proceeds. Chris, feeling smug after receiving some papers from the state of Virginia, felt the need to pressure Vivian out of her hard-earned money. He thought that 25% of all the donations for the audiobooks should be used to support his already lavish lifestyle. Vivian kindly declined the offer on her YouTube account via her spokes-"person".