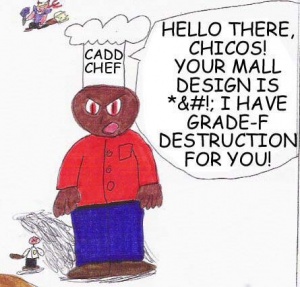 Indeed enormous and badly-proportioned, but his grading system is pretty accurate. Note Mary Lee Walsh flying in the background on a broomstick.

CADD Chef is a villain in the Sonichu comics, based on Christian's actual Computer-Aided Drafting & Design teacher, Kenechukwu C. U. "Kene" Meniru, MArch, PhD, at Piedmont Virginia Community College. His cartoon incarnation is of course patterned after the "Chef" character from South Park.

Based on CADD Chef's dialogue, it is likely that Chris-chan had a dispute involving his CADD teacher: when looking at Chris's "designs" in his comic, such as his design of his CWCville Mall, it's apparent that he cannot make things look proportional worth a shit, and got an "F" like he deserves. But, of course, being the self-centered butthurt dumbass he is, he believes that he did not deserve the "F" and that the teacher was playing "Kick the Autistic" again, particularly evident in the quote above.

Interestingly, CADD Chef is possibly the only character whose retcon name reveals more information about his real-life inspiration than his original name did — in Sonichu #7, instead of simply being called CADD Chef, he is referred to as Keneru-Meneth -CADD Chef-.[2]