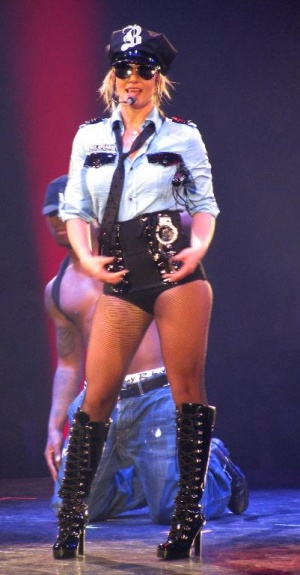 Britney Spears (born 2 December 1981) is an American pop singer who is Chris's favorite music star.[2] While one of the most famous and important singers in pop music, much like him, she has a tendency to make poor choices (such as appearing in unflattering photos).

She is a very important figure to Chris. For years, he used her as a means of proving that he is straight and not gay. She also was hugely popular around the time Chris was enrolled in Manchester High School, so her music carries plenty of fuel for nostalgia over the past when things were happier for him.

And here, we see where he got the whale-tail idea...

It's unlikely that Chris is a fan of Spears solely because of her music. He has used her as a method of proving his heterosexuality, as seen in I am STRAIGHT, where he proves to the trolls that he is straight by holding up a suggestive poster of Britney. On 10 June 2009, Chris once again relied on Britney Spears to prove his heterosexuality when he favorited several of her music videos on his YouTube account. His attempt backfired when the account was promptly hacked and filled with gay propaganda videos. (It is unconfirmed if the account was really Chris's, but it probably was.)

The entire process of Chris using Britney to prove his straightness is ironic, as Britney Spears is a beloved icon among homosexuals; when Vivian Gee pointed this out in an e-mail on why others believe him to be gay, Chris counterclaimed this by saying that he "enjoy[ed] HER BODY and HER VOICE."

Britney and Chris's past

Chris's obsession with Britney might also simply have to do with timing. Her career took off in 1998, near to when Chris came of age. He may be fond of her music simply for the nostalgia factor--it reminds him of a time when his life was much happier. His interest in her most likely started because all of his friends were girls and many teen girls at the time idolized Britney. This would give Chris the opportunity to be "one of the girls." 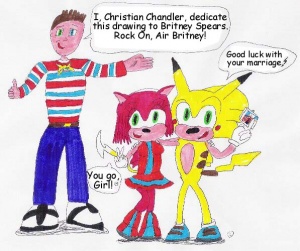 For the record, Britney's marriage only lasted twelve hours.