Jason Kendrick Howell is the original creator[2] of the "Chris-chan" ED page. Chris wanted to call the jerkops on Howell for allegedly having sex with an underage girl, Kathleen. (Spoiler: Howell never did have that underage sex.) Howell goes by "Liquid Snake" on 4chan's /v/. According to Chris, he is also "the Dork of Ages", a phrase stolen from American Dad!.[3]

After Chris discovered the ED page he had some e-mail correspondence with Jason, from which Chris got Jason's phone number.[4] Chris later used the phone number to find the city which Jason lived in, as well as tracing down his MySpace page, where he found Kathleen by looking at Jason's friend list. Chris made the assumption that Kathleen was Jason's girlfriend and Jason has had sex with her, which, combined with Kathleen's status as a seventeen-year-old, led to his accusation of Jason having underage sex. Chris also took note of the background image on Jason's MySpace page, and based Jason's appearance in the comic upon that picture. 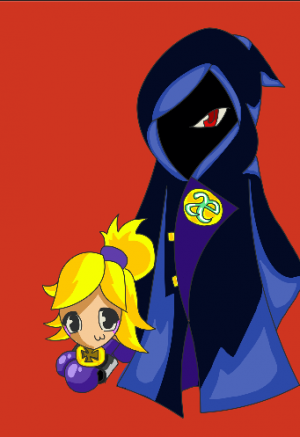 After Jason's inclusion in the comic, Chris exchanged some more e-mails with him, but it soon came to a hold. About a year later Chris's Sonichu site was hacked by Clyde Cash. Chris, assuming that Jason was behind the deed, responded by calling him and making the infamous "I'LL BREAK YOU DEAD" threat.

Jason eventually joined forces with Vivian Gee, recording his own voice for the Audiobooks. He also provided commentary for the Official Videobooks, though he didn't so much comment on the videobooks so much as just ramble about the history of Chris with 4chan and ED. 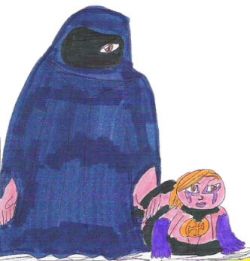 Jason as he appears in the comic. 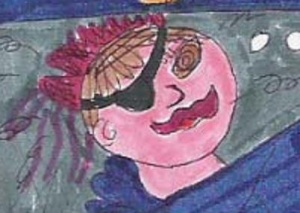 Jason appears in Sonichu #8 in the episode, "Rage Against the Garbage", as the episode's primary antagonist. He appears to reside in the 4-cent_garbage.com building on the 72nd floor (because 72 is 66+6. Get it? 666. Because he's evil.

Jason wears a cloak most of the time, and also has an eyepatch, headband, and brown hair. The eyepatch, headband, and hair color sparked some curiosity and confusion amongst the trolls, considering that it was almost a blatant reference to Big Boss of the Metal Gear series. Some were worried that Chris had actually played MGS, and was now ripping it off. However, it was revealed later by Jason himself that he actually sent Chris a photograph of himself wearing an eyepatch. (Jason also tried to send Chris the first disc of Metal Gear Solid 3: Subsistence, but due to Chris's mail paranoia at the time, it was returned to the sender.[5])

Sonichu and Rosechu confront Jason and Kathleen over the images featured on the website of Rosechu's TRUE and HONEST genitalia. After refusing to take down the website following Sonichu's shitty and meaningless speech, Sonichu attempts to fight Jason, only to have his furry ass kicked by Jason's "dark force" powers. Rosechu (as The Incredible Lioness) then face-rapes him nearly to death (a move stolen from Kekko Kamen), but the "dark forces" keep him alive.

Later on in Sonichu #10, Jason is seen talking with Jack Thaddeus, Beel and Clyde Cash on the "66+6" floor. He calls them all Gaywads and flies off with Kathleen at his side to his two-storey house in the suburbs.

In a video released on 30 October 2010, Chris presents a revised ending of Sonichu #10, in which he reveals that the couple broke up when Kathleen cheated on him with their secretary, and she later went to maximum security prison for smoking pot, where she shares a cell with Mary Lee Walsh. Jason supposedly dies offscreen in a car crash.