The Equestrian calendar is what Chris believed was a calendar for Equestria, a setting from the My Little Pony fictional world. He would attempt to use mathematics to convert from real-world dates to the supposed Equestria dates in the Sonichu 12-9 comic and in other drawings. In actuality, the calendar was a concept planted in his mind by an Idea Guy.[1]

The calendar in its current state makes no sense and a correction has been speculated.

The names were copied from the seasons of planet Sera in Gears of War. In the games, there are two more months named Sorrow and Brume. Chris probably did not include these because Sorrow sounds too sad for his hugbox and he has no idea what Brume means (mist).

The order of these has been retconned at least once by Chris. In the comic, the order is said to be

But a problem arises in the third arc of the book. Chris breaks up with Jessica Quinn's self insert Diamond Melody on the 7th day of Bounty in 2017. But he met up with his new sweetheart on the 24th of Frost of 2017. This is a paradox as Night Star is supposed to meet Kun after the breakup.

Chris never realized this error, but fixed the calendar by mistake in a tweet in June 2018, where he stated the order again. This time around Frost occurred after Bloom thereby fixing the paradox.[2]

The speed of rotation along its axis is faster for Equestria when compared to Earth. In one year, there are exactly 457 days instead of the 365.25 on Earth. So there aren't any leap years in Equestria.

But this causes a problem - Chris mentions the dates on different planets at the same point of time as the characters keep jumping around between Equestria and CWCville. He has confirmed 6th January 2018 and 6th of Storm of 2018, 31st of May and 31st Bloom of 2018 and 24th of Rise and 24th of February of every year fall on the same date.

Dates mentioned in the comic

Most months are similar to the months in the Gregorian calendar with the exception of Heat which is made of June, July and August. These are in the correct order, the way Chris intended it be.

Problems in the calendar 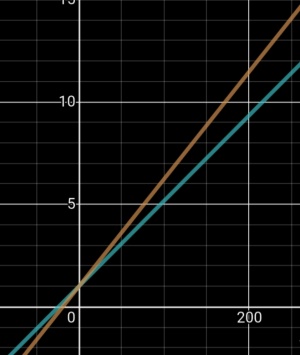 Horizontal axis is hours passed since the beginning of the year.
Vertical axis is the day of the year.
Chris has stated the years are one to one in Sonichu 12-9. The graph clearly shows that the date can only coincide properly on one day of the year. In this graph 1st January has been chosen as the coinciding date. As the lines never touch each other again, the dates can never match again.

So the calendar cannot have more or less than 365.25 days as atleast three dates match exactly. The only date that can overlap between a gregorian calendar and the 457 day calendar every year is the first day of the year. But since 24 Feb/Rise isn't the first day, it cannot overlap every single time.

Chris has only ever mentioned the 457 day year once in Sonichu 12-9, but due to other problems in the comic such as the months being completely off and paradoxes being formed, the 457 day calendar can be rejected. Due to certain dates matching up perfectly every year, it can be confirmed that Equestria and Earth have the exact same time of revolution.

Due to the calendars being the exact same except for the month of Heat, conversion between them is extremely simple.