Heather making her much anticipated appearance and absolutely no sense. 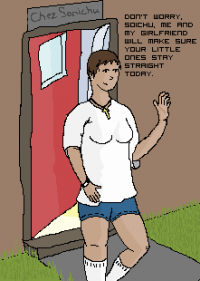 CWCville, where the nannies cower in fear of accidentally showing their sexuality.

Heather Iglesias is the nanny of Sonichu and Rosechu's hideous secret children. While the busy parents are away murdering people at the behest of their creator, Heather makes sure the young Sonee and Roseys receive at least a modicum of parental upbringing. Heather gets paid from the monthly checks the Sonichu family receives.[1]

Heather is a Hispanic lesbian. In spite of her racial and sexual status, Sonichu and Rosechu have tasked her with the job of keeping the little horrors "safe" and "under her watchful eye."[2] As per Sonichu's by-proxy homophobia, she is explicitly instructed to conceal her sexuality from his children.

It is not disputed among trolls that Chris created Heather as a means of appearing less intolerant of homosexuals, similar to the "I'm not racist, I have black friends!" argument frequently seen on the Internet by racist, bigoted JERKS. All instances of homosexual characters prior to Heather were insane sexual deviants such as Naitsirhc. How she avoided the contamination of the water by Chris in Sonichu 10 is not explained, nor was she ever a victim of Chris's manipulation to turn straight and paired with a forgotten character as Naitsirhc had been — yet Chris retconned the straight-water plot anyway to make an excuse for his transition and to make Sonichu's children gay. The fact that she is also Hispanic suggests that, like many terrible white male storytellers before him, Chris has tried to heap all of the token minority representation onto one insignificant character (note how Chris made her a minority and gave her the stereotypical role as a nanny).

Chris originally despised homosexuals of either sex, but prior to creating Heather his views on lesbians completely reversed, due to exposure to them in pornography. As such, Chris could create an extremely peripheral homosexual character without much stress, although of course that character's sexuality is implied to be a horrifying and shameful liability that children shouldn't even know about.

An off-screen character for years, she finally appears in Sonichu 12, tending Russel and Cynthia — Chris's neglected fictional children spawned via self-impregnation. We learn that she speaks in an unintelligible mishmash of English and Spanish, somehow failing at both languages and basically sounding like a stroke victim.