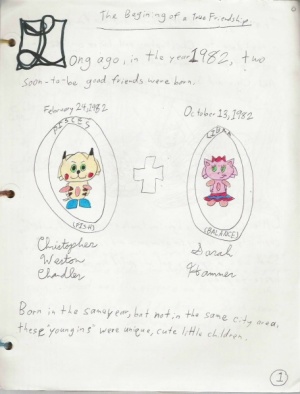 Evidence that even Robbie is (yet another) Mary Sue.

Sonichu and Rosechu's children are:

They can be identified by their whiny, high-pitched voices and irritating speech impediments. To date, neither Sonichu nor Rosechu have been seen spending time with a child of the opposite sex to themselves. Rosechu spends large amounts of time with Cera and Christine in the kitchen, while Sonichu and Robbie do manly activities such as gazing into each others' eyes and talking about their Wii.

In Sonichu 11, Cera is shown to be playing with her friend Kevin who she seems to have a small crush on. This is short-lived however and is later mentioned to have evolved in the Clip Show-suddenly a lesbian.

The children conclude almost every sentence with "Yay!" Obviously, this is how Chris talks, not how children talk. They are also known for their creepy, blank expressions and soul-less eyes.

The children are widely detested, even more so than the other characters.

In November 2011, it was revealed that they have evolved into Cera Rosechu, Christine Rosechu and Robee Sonichu [sic], formed a band and that Robee has become a cross-dresser.

Also note how they are the only characters to have hair a different color than their fur color- Robee has brunette hair, Christine is a ginger, and Cera has purple-ish hair. Never explained. It isn't dyed- they evolved that way.

In 2017, Robee has now become 'Roberta' and is full transgirl at the age of ten- complete with a developed chest and all.

The kids' first prominent appearance is in the sign Chris drew to show his support for McIntire Park. They've also been seen in two pages of Sonichu #9, as well as getting a quick mention on page 41 of the same issue. They spend the rest of their time being watched over by their Spanish lesbian nanny, Heather Iglesias, while their neglectful parents traipse around town murdering people at the behest of their father.

The hellish abominations spawned from Rosechu's loins have also appeared in "A Sonichu and Rosechu Christmas Story", and in Sonichu #11. Here, Christine alludes to having lost her virginity at age 1, and Robbie replaces his R's with W's while speaking in an effort to be as saccharine and grating as possible, but his actual dialogue is far too complex for a toddler to come out with - perhaps alluding to something else. Cera (formerly Cerah) assists Rosechu in the kitchen and breaks the fourth wall to say "I wuv you!" to Chris.

Robbie makes a brief appearance in Sonichu #10, describing an incident which involved him urinating on a lizard. Needless to say, cruelty to animals is one of the early signs of a potential psychopath.[1]

On 12 November 2011, it was revealed that not only have all the children evolved into adults, but that they have also formed a pop band: Robee Sonee and the Tomgirls. Moreover, like Chris, they have mutated into more disturbing forms: Robbie has changed his name to "Robee" and has become a tomgirl (or the Electric Hedgehog Pokémon equivalent: Sonirose?) while Cera has become a tomboy. Note that this change comes after Chris wiped out all homosexuality in Sonichu #10.

Chris expanded on this in 2014: Robbie/Robee is now a "Lesbian Tomgirl Tranny Cross-Dresser (still very much into women)", Christine (now inexplicably named "Crystaline", probably so Chris can have the name all to himself) is bisexual, and Cera is a lesbian.[2] Quite the progressive family for a town that carried out a genocide of LGBT people. As ridiculous as this is, it suggests Chris is still making deific adjustments to CWCville, which fuels hope for further Sonichu installments. In Sonichu 11, Christine finally evolved, whereas in Sonichu 12 Robee evolved. 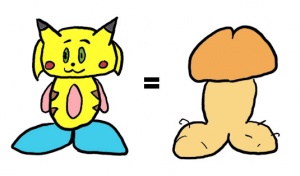 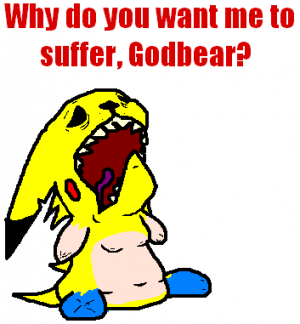 The children of Sonichu and Rosechu are also a popular subject for fanart. In August 2009, a large volume of art depicting Sonichu and Rosechu's frolicking children was emailed to Chris. He did not appreciate it, for some odd reason. Ironically, in a later comic, he all but confirmed this art as canon with the implication that Christine is not a virgin.