Robee Sonee and the Tomgirls 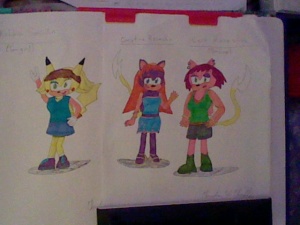 The band in all their cross-dressing Crayola glory.

Robee Sonee and the Tomgirls is the name Chris gave to his second crappy musical project. Once again, in reality, there is no actual band, just Chris singing awfully over copyrighted pop songs. The "band"'s first album, SPARKLE like you mean it: ROBEE'S BALLAD, was leaked in November 2011. Like Christian and the Hedgehog Boys, Robee Sonee and the Tomgirls are composed of familiar faces. In this case, it's Robbie Sonee, Christine Rosee and Cerah Rosee. Despite their being full-blown Sonichu and Rosechu, they still use the Sonee and Rosee nomenclature. Since his last appearance, Robee (also known as "Robbie") appears to have become a cross-dresser.

The band and album names also show Robee's narcissism, much like his creator. The band is named after him only, as "tomgirl" would not apply to either sibling – Cera is a tomboy and lesbian, and Christine is a cis female, no need for "tom" anything. Therefore, Robee is the only "tomgirl" in this band. He also appears to be the lead singer, though Christine is the one to show interest in the arts/singing.