From CWCki
(Redirected from Wii)
Jump to navigation Jump to search 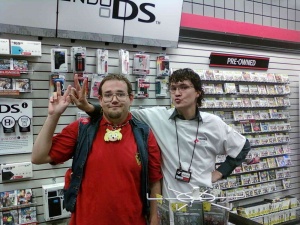 Chris at GameStop, posing in front of various Nintendo products with a sales associate.

Nintendo Co., Ltd. (Japanese: 任天堂株式会社 Nintendō Kabushiki gaisha) is a multinational video-game company from Kyoto, Japan, which was founded in 1889 and started off producing playing cards. During the latter half of the 20th century it started getting more and more involved in the video game industry. In 1977, 5 years before the birth of Chris, Nintendo brought out its first gaming console, the Color TV Game(s).[1] It is now one of 3 chief competitors on this market, along with Microsoft and Sony. 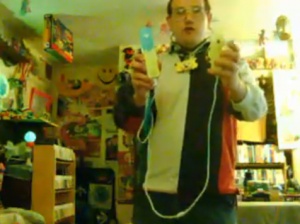 Chris, with his Wii.

Chris currently owns several Nintendo consoles, as well as a shitload of games for them. For a long time (before the PS3 came along), Animal Crossing was the biggest game in his life and he made the hour-long Animal Crossing Documentary in which he would tell Nintendo about his many personal problems and how much he hated the Sony PlayStation. It still remains his longest video to date.

Along with Sonic the Hedgehog, Pokémon was his "inspiration" for creating Sonichu and the other Electric Hedgehog Pokémon; this was actually positively covered by Nintendo Power Magazine.

The extent of Chris's Nintendo fanboyism in the early-mid 2000s is demonstrated in the first issue of Sonichu's News Dash, where Chris describes the release of the then-new Sonic Heroes on the PlayStation 2 and Xbox as an "ethical mistake", and goes on to claim that "the PS2 and X-Box versions remained dusty on the shelves, and the GCN version SOLD OUT." In reality, the Gamecube port of Heroes was outsold by the PS2 port by a factor of roughly three-to-one.

In 2010, Nintendo's Flipnote Hatena service became a major part in Chris's ongoing Love Quest. In 2011, Chris felt betrayed by his favorite company for not porting the Flipnote software quick enough. 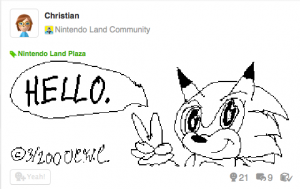 In several videos released in 2011, a Giant Mii AR Card is visible on Chris's wall.[2] This particular item was only available to Club Nintendo members, for the price of 300 coins.

On December 2013, a user on 4chan's /v/ board discovered Chris's Miiverse account and posted pictures of some of his posts. This means Chris has spent taxpayer money on a Wii U.

On 10 January 2015, Chris posted on his FIX SONIC'S ARMS IMMEDIATELY, SEGA!!! group that he will permaban anybody who talks about Mario on the group, especially after the weening that occurred on the page, mentioning that "The Sonic Team definitely kicks the Plumbers' butts".

On 19 January 2017, Chris revealed in a personal text message that he had no opinion about the then upcoming Nintendo Switch, as he was preoccupied.

On 7 March 2019, Chris uploaded Very Cool Birthday Present! :), an unboxing of a Nintendo Switch sent to him as a gift from Sarah and Steve. 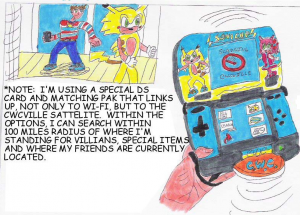 Seems an awfully convenient plot device - it's almost as if Chris isn't a very talented writer.

In Sonichu #5, Chris uses a DS to connect to Wi-Fi, to search CWCville for villains. 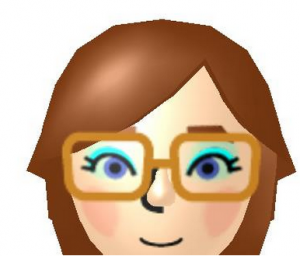 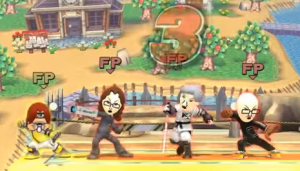 Miis of autism and Chris's half-siblings: Carol, David and Cole.

A Mii is a cartoon version of oneself used in various Nintendo games and services.

On your Game Boy Advance SP
create 'yer MII
den play it on WII
with your PSP
hooked to your PS3
cause it's fun
see?
And never play a Hex Box 360
Because it's stupid and you're not a dummy

He also told a version of this poem to Megan.[3]

The Wii Remote of Fail is the result of Chris taking it upon himself to paint custom Sonichu colors on his Wii Remote and Nunchuk during an autistic epiphany. He thought that "Mr. Mayamoto-san" of Nintendo would like to see these, so he then showed them off to the world in his YouTube video CWC to Mr. Miyamoto.

It made a cameo appearance as a go-kart in ModNation Racers. First as a pre-made casket car that Chris simply called a Wiimote, he would then recolor it with his own personal touch just like so many other things.

It was offered for sale on eBay in April 2018 due to the Financhu Crisis. Chris also sold off his Wii console[4].

The Nintendo Switch is a hybrid video game console. Capable of being both a home console and a portable device, it was released in March 2017 as the successor to Nintendo's disastrous Wii U - and has quickly proven itself to be an extremely popular product. [5].

Much like with the PlayStation 4, Chris originally had no interest[6] in buying a Switch despite his brand loyalty to Nintendo and his interest in the system's immediate predecessor. This would change on 7 March 2019, when he was gifted one by two "fans" named Sarah and Steve. He recorded Very Cool Birthday Present! :) to show it off, inadvertently revealing they were concealing some shady ulterior motives.